Last week, my buddy Tom Angell revealed in his must-read MarijuanaMoment.net newsletter that Twitter, the official font of Trump wisdom, was censoring the word “marijuana” from its default search algorithm.

In English: if you went to Twitter and typed “marijuana” in for a search, you’d get no results, as if nobody on Earth with Twitter is talking about marijuana.

My @RadicalRuss account tweets at least five times a day about marijuana, so what gives?

The folks at Twitter decided that “marijuana” (and “pot,” “weed,” etc.) were “sensitive content,” like, say, tweets containing sexual descriptions, racial epithets, and profanity. If you wanted to see such filth, you had to change the default setting on your search to allow that content.

The problem, of course, is that not everybody is that proficient with Twitter to know they must take an action before they can see results for marijuana.

Angell put forth a petition to urge Twitter to change its policy. This morning, they reversed themselves. The petition and the media coverage of it was embarrassing enough that this corporate giant and internet behemoth had to admit that marijuana wasn’t worthy of censorship.

And why should it be?

The hottest growth industry in America these days is cannabis, growing by over a third in the past year and projected to maintain growth of a quarter over the next few years. Fully 3-in-5 Americans believe marijuana should be legalized; 7-in-10 say it should be a state, not federal, matter; 3-in-4 believe it’s no more harmful than alcohol, and over 9-in-10 say it is a medicine doctors should be allowed to recommend.

“We want to help keep people safe both online and offline,” Google explains, “so we don’t allow the promotion of some products or services that cause damage, harm, or injury.”

I’m not sure what weed Google is smoking, but my stash doesn’t cause any sort of “damage, harm, or injury” to the extent explosives, guns and ammo, and tobacco do.

There are restrictions on Google’s alcohol advertising. You can’t run them in the predominantly Muslim countries that ban alcohol and you must target people of age in their country. If you do, then you’re allowed to advertise “for the online sale of alcoholic beverages” and “brand or informational advertising for alcoholic beverages.” 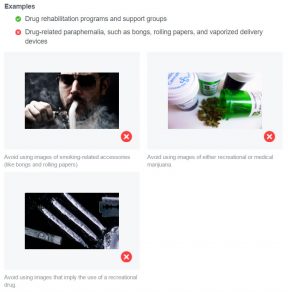 Facebook’s no better. In their ad policies, you “must not promote the sale or use of illegal, prescription, or recreational drugs.” However, you can advertise for “Drug rehabilitation programs and support groups.”

Facebook even specifically mentions, with illustration, “Avoid using images of either recreational or medical marijuana.”

Facebook also bans the advertisement of tobacco and tobacco products; weapons, ammunition, and explosives; and adult products and services. However, you may advertise “Blogs or groups connecting people with tobacco-related interests [or] weapon-related interests…”

So, you can put up a Facebook ad for your cigar aficionados club and your local gun show, but not a veterans’ medical marijuana support group.

The adult product restrictions are like the marijuana restrictions – you can only advertise it if you’re trying to get people to not enjoy them.

“Ads must not promote the sale or use of adult products or services, except for ads for family planning and contraception,” Facebook states. “Ads for contraceptives must focus on the contraceptive features of the product, and not on sexual pleasure or sexual enhancement, and must be targeted to people 18 years or older.”

If you want to sell some alcohol on Facebook, though, go right ahead. As on Google, you can’t target people in countries that ban alcohol, or people under their country’s drinking age, or promote the intoxicating effects. You can advertise for people to buy alcohol at your shop or to attend an alcohol-themed festival, like an Oktoberfest.

But forget about advertising to adults to buy legal marijuana at your shop or to attend a marijuana-themed festival, like Seattle Hempfest.

It is understandable that Google and Facebook want to shield the eyes of web surfers from shocking and prurient content. They also want to protect their political capital against conservative culture warriors who’d make their next ask in the statehouse or Congress more difficult.

But as marijuana becomes increasingly legal, their censorship becomes increasingly hard to defend. Internet advertising is micro-targeted these days based on your profile. Keeping a Google or Facebook ad off the page of somebody under age or somebody in a non-legal location would take hardly any effort on their part. They’ve both seemed to have that figured out for alcohol, after all.