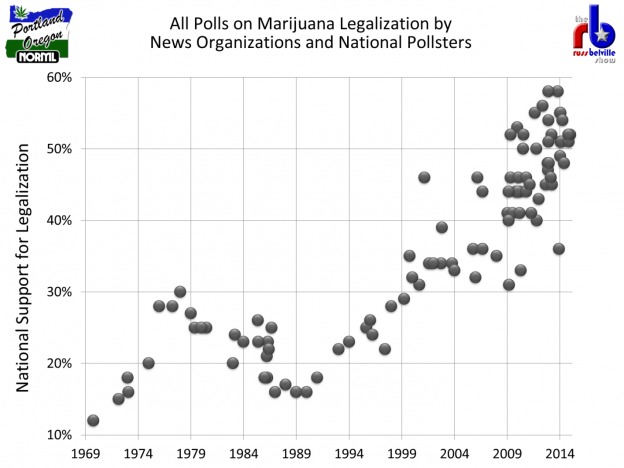 Since 1969, news organizations and social pollsters have been asking Americans whether they support marijuana legalization. At the beginning, just 12 percent of the nation supported legalization. In 1971, President Nixon’s National Commission on Marihuana and Drug Abuse produced a report that found marijuana to be a relatively benign drug that should be treated with a policy of decriminalization. Nixon was infuriated by the report and ignored its recommendation, continuing the policy of criminalizing marijuana consumers. However, the report and the growing use of marijuana by the younger generation led to the steepest increase in legalization support over the next decade, rising to 30 percent support by 1978.

After the election of Ronald Reagan, a backlash against the permissive attitudes of the 1970s combined with the high-profile cocaine-related deaths of comedian John Belushi and basketball phenom Len Bias led to a decrease in legalization’s support. In the second decade of polling, support for marijuana legalization crashed to just 16 percent by the end of Reagan’s second term.

At the dawn of the 1990s, Americans were slowly becoming aware of the medicinal uses of marijuana, thanks to pioneering medical marijuana activists helping victims of the growing AIDS epidemic in California’s San Francisco Bay Area. Aided also by Bill Clinton’s admission, the first for a presidential candidate, that he’d smoked weed in college (albeit unsuccessfully), support for legalization began rising in the third decade back to about the same 30 percent we’d seen at the end of the 1970s.

As we began the new millennium, another conservative president had been elected in George W. Bush, but this time the topic of medical marijuana had shifted the debate, negating the efforts of past prohibitionists to cast marijuana as a dangerous party drug. By the end of the fourth decade of polling, we saw the first nationwide polls to show majority support for marijuana legalization.

Now halfway through our fifth decade of polling on legalization, most polls are showing majority or plurality support for legalization, including the most important polls – elections legalizing marijuana in four states and the District of Columbia.