Yesterday was the first day of early sales of marijuana to all adults from regulated Oregon medical marijuana dispensaries. The legislature wisely recognized that adults became legal to possess and grow marijuana as of July 1, 2015, and that the bureaucracy tasked with creating the legal market place for adults to buy their marijuana wouldn’t have the first stores open until this time next year. Rather than incentivize black market or cross-border sales for an entire year, our lawmakers passed a bill allowing the existing medical dispensaries to sell a limited amount of flower – a quarter ounce – to any adult customer.

Which means for the first time in my life yesterday, after a quarter-century of buying marijuana to smoke, I made my first completely legal, guilt-free weed buy.

I began smoking weed on July 4, 1990. I was a long-haired rock musician and getting weed was never a problem. My guitar player knew a guy and the two of us would pool our money to split an ounce. Or, as authorities might have put it, we engaged in a criminal conspiracy for the solicitation for purchase of a prohibited Schedule I drug, punishable by arrest and incarceration.

I eventually came to find my own guy who grew his own weed at home and sold it to a few friends like me. It was still $300 per ounce, but at least I was in those purchases by myself, no conspiracy involved. After I moved away from Idaho, I learned my guy got caught by law enforcement, and now he’s finishing out an eight-year stay at the Idaho State Penitentiary.

I moved to Oregon in 2003 after discovering my wife was a prime candidate for the state’s medical marijuana program. In addition to helping ease her conditions of migraine and endometriosis, the caregiver card I received to treat her as a patient meant that I was protected from arrest for the possession and cultivation of marijuana used to treat her condition.

But we all know what it really meant. As Oregon medical marijuana dispensaries were established in 2013, it meant that I had a card that allowed me to go shop for marijuana in a store. Yes, I made purchases there for the medicine to help my wife, but about half of those marijuana purchases made their way to my healthy body as well. Technically, I was making legal purchases, but what I was doing with those purchases wasn’t legal. Plus, there was a lingering feeling of guilt that I was abusing a system designed to help sick and disabled people and, by doing so, giving some credence to the complaints of anti-medical marijuana critics.

Then Washington State began opening up their legal recreational marijuana stores. I, like about sixty percent of their customers, made the trip across the river from Portland to Vancouver, Washington, once or twice a month to help Main Street Marijuana become the best-selling marijuana store in the state. A perfectly legal recreational weed purchase that I then drove across the state line, violating Washington, Oregon, and federal law, where I then perfectly legally possessed and consumed that marijuana in Oregon.

But yesterday? Yesterday I was able to walk in to a weed store, make a purchase of quality, tested, pure cannabis flower, drive it back to my home, and smoke it. For the first time in my life, I did that without breaking a single law or feeling a twinge of guilt.

The price was $24 for an eighth, roughly what I’ve always paid for a purchase that small. The cost is tax-free through the end of 2015 as well, but even as taxes kick in for 2016, they will be offset by a massive increase in production as recreational growers come online. I wouldn’t be surprised to see $15 or even $10 an eighth by the time we’re rolling into 2017.

After 25 years of toking and 10 years of activism, it’s nice to be living in paradise.

Hyperlinked Text of the Nevada Initiative to Regulate and Tax Marijuana 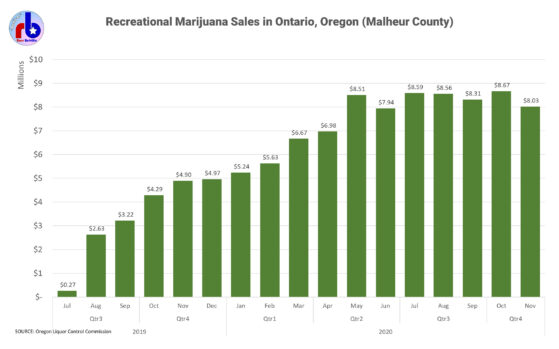