Prior to their shellacking at the hands of The Ohio State University in the College Football National Championship Game, the fans of the Oregon Ducks were rocked by the pre-game suspension of star wide receiver Darren Carrington for failing an NCAA-administered drug test due to marijuana metabolites. But what most fans don’t know is that had Carrington been a soldier, airline pilot, or Olympic athlete, it’s entirely possible he wouldn’t have failed their drug tests, since college athletics maintains the lowest threshold for testing positive for marijuana compared to almost all sports and, for that matter, industry.

Sleepy little Eugene, Oregon, home of the Ducks, has long been a bastion of hippie ethos and marijuana acceptance. A former Duck running back who played in the NFL personally told a friend of mine that availability and acceptance of marijuana at Oregon was one of the main reasons he chose the school. It was only three years ago that three Oregon football players were stopped in the wee hours of the morning on the freeway for doing 118mph. When the state trooper smelled marijuana in the car and asked who was in possession, then-Ducks cornerback Cliff Harris simply replied, “We smoked it all,” and the players were let go to drive on home.

Privacy concerns prevent the NCAA from even admitting that Carrington’s failed test was for marijuana, but anonymous sources close to the situation confirmed, as does awareness of Oregon culture, that the substance was marijuana. We also do not know how much marijuana was detected, but the NCAA threshold for inactive marijuana metabolite detection is five nanograms (5ng) per milliliter of urine.

Readers paying attention to marijuana legalization may recognize the limit of five nanograms as the standard that Colorado and Washington are inaccurately using to determine impairment behind the wheel. However, those standards are for active THC – the impairing molecule – in the bloodstream. What Carrington and anyone failing a workplace urine screen are facing is detection of an inactive marijuana metabolite, known as THC-COOH, or carboxy THC. “Metabolite” means that the THC has already been metabolized by the body – in a sense, detecting metabolites only proves someone isn’t high anymore. Worse, detection of these metabolites can happen for weeks or months after marijuana use.

Some people are heaping scorn on Carrington for not having the sense to not smoke pot during the football season, especially with a national championship game pending. It was the rule, and he knew it, but considering the science we now have showing how THC can protect the brain of concussion victims, punishing a football player for using marijuana is both counterproductive and cruel. We wouldn’t blame the victim of stupid rules from decades past, like the early 20th century Southern collegiate prohibitions on interracial dating; why should we blame the victim of this rule that also exists for moral reasons alone? Nobody’s contending that marijuana is a performance-enhancing substance or that Carrington was high on the field or in practice or that his marijuana use endangered anyone. The NCAA simply bans it because it is illegal, just as alcohol is for the 19-year-old Carrington, but the NCAA doesn’t test for that.

The rule seems especially stupid in comparison to how other sports and safety-sensitive industries test for marijuana metabolites. A soldier in the US Army can pass with under 15 nanograms of THC-COOH. The NFL raised their standard from 15 nanograms to 35 nanograms recently. Major League Baseball sets their standard at 50 nanograms, the same as commercial airline pilots must pass under federal regulations. And the World Anti-Doping Agency, which controls amateur and Olympic sports, recently raised their standard to 150 nanograms, because, as they put it, they only wanted to catch athletes who were using marijuana at or before events, not weeks or months prior. 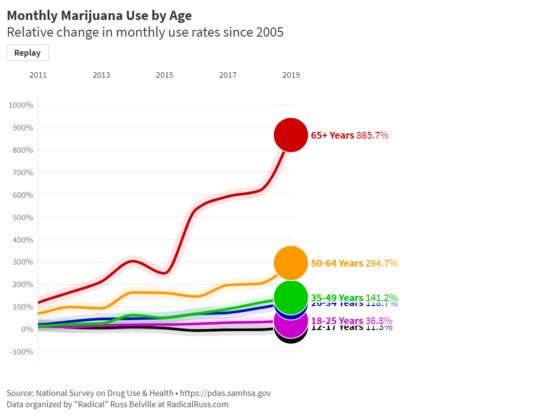