PrevPreviousWhy High Washington Marijuana Prices Are a Good Thing
NextPolice: California Weed is worth $700 per OunceNext

The governor of New York, Andrew Cuomo, who has been a longtime opponent of medical marijuana, has today delivered a bombshell of demands before he’ll sign a medical marijuana law that is fighting its way through the Assembly and Senate. The legislature is set to adjourn this week, so his delay in announcing these demands is clearly not in good faith. His demands would not only make the medical marijuana program largely unworkable, they are also the latest deep step into the political box canyon medical marijuana laws have become.

The box canyon is a metaphor from old cowboy westerns where the gunfighters would be trapped by canyon walls ahead and to either side, unable to go anywhere but backwards into the clutches of the posse or Indians pursuing them. The Box Canyon occurs politically when tighter and stricter forms of medical marijuana laws are passed to appease the powers that wish marijuana prohibition to continue. We end up being forced to go backwards into the agenda of our opponents, trapped on three sides by the political frames of “medical”, “compassion”, and “criminals”.

First, it was the right of doctors, not legislators, to recommend medical treatments. California famously allowed doctors to recommend cannabis for any condition they believed it would help. Advocates explained that these were “patients, not criminals”, subtly defining a frame where cannabis consumers exist in two flavors: criminal and patient. Advocates presented the sickest cancer and AIDS patients and dared voters to choose compassion over prohibition, defining the frame where hard political choices must be made in favor of the sickest even if the choices ignore the majority. Advocates even tried whitewashing getting high as “medicating”, pot parties as “medicine evaluations”, and healthy people’s use of marijuana as “all use is medical”, thus playing fast and loose with a frame of “medical” that most people understand as doctors, medicines, and serious illnesses.

So into the Box Canyon marched the next few states to pass medical marijuana laws. California’s medical marijuana law began being described with sarcasm quotes around “medical” as media reported on Venice Beach bikini sign twirlers and twenty-somethings getting recommendations at rap concerts. Condition lists were created where legislators decreed exactly for which ailments a doctor would be granted permission to recommend cannabis as a treatment. Cultivation and possession limits were added rather than just letting the doctor determine how much medicine the patient would need. All so fewer of the “criminals” could get in with the “patients”. And who could object? Compassion dictates that we make hard political choices for the sickest, right? We’ve got to ensure that the program is just about “medical”, right? Better the “patients” have some medical marijuana with restrictions than no program at all, right?

Next, it was the right of patients to cultivate their own cannabis – what I consider to be the true miracle of medical marijuana. It’s not that cannabis contains these remarkable cannabinoids that contribute to health and wellness. If it’s really about THC, CBD, CBN, CBG and so on, medical science will eventually extract, isolate, refine, and deliver those cannabinoids and synthetic replicas in consistent, effective dosages. That’s the Box Canyon that leads to GW Pharmaceuticals replacing all the plants in your dispensary with pills, sprays, tinctures, and inhalers that are Schedule III, prescribed by any doctor, and paid for by health insurance.

No, the miracle of medical marijuana is that in order to be healthy, a patient doesn’t need a big insurer to fund a big healthcare company that pays a big doctor who dispenses big pharma drugs. A patient can grow a little medicine in the closet or the backyard, that’s the miracle! But not since 2010, when Arizona became the first medical marijuana state to deny the right of all patients to cultivate their own medicine. If a patient lives within 25 miles of a dispensary, advocates decided, they should be forced to shop at that dispensary and forbidden from growing their own medicine. That meant some patients funded their own grows after the law passed and then were forced to abandon them as dispensaries came online in Arizona. It’s to the point now where 96% of the population lives within 25 miles of a dispensary; effectively a statewide home grow ban. And who could object? Without that rule, Arizona may never have passed medical marijuana and compassion dictates we make hard political choices for the sickest. And it is “medical”, right; nobody gets to make their own Oxycontin.

Since Arizona in 2010, none of the recent medical marijuana states have allowed for all patients to home grow. Once law enforcement and their lackeys in the governors’ mansions learned advocates would budge on the aspect of medical marijuana that threatens them most, they began chipping away at the rest. Chronic pain? Why, too many “criminals” could fake that; it has to go. Glaucoma? We have better drugs that are actually “medical”; patients should be forced to use those. Severe nausea?  Naw, we don’t like that, either, take it out or none of the cancer patients get any marijuana! Again, who could object? Compassion dictates we make the hard political choice to help the sickest cancer patients, right?

Lately, even the most anti-medical marijuana states have found their own way into the Box Canyon by embracing the cannabidiol, or CBD-Only medical marijuana laws. Seeing that little girl on the Sanjay Gupta documentary who was cured of her epilepsy awoke a firestorm of support from parents seeking that relief, emboldened because they didn’t have to take on any of the stigma of being “criminals” because CBD doesn’t get you high. Medical marijuana advocates had been beating red state Republicans with the cudgel of “compassion” for years – how could the GOP be so afraid of “criminals” that they’d let a cancer patient suffer? Now the Republicans get the last laugh by passing CBD-Only bills that make that medical marijuana story go away and lead to headlines describing their “change of heart” on medical marijuana. And who could object – compassion dictates we make the hard political choice to help the epileptic kids, right?

With home grow banned, most conditions restricted, and the “high” removed, the final step into the Box Canyon is to eliminate the marijuana plant entirely. Minnesota just took that step by passing a medical marijuana law that requires shopping at dispensaries for only pills, sprays, inhalers, and tinctures derived from cannabis that patients never get to touch, setting up the exact model of cannabinoid distribution GW Pharmaceuticals seeks to control.

Now, Gov. Cuomo in New York has demanded that there be an absolute ban on the smoking of any medical marijuana. Patients should only get cannabinoids in oil or pill form. Patients should not be allowed to share their medicine with each other. Cheating your way onto the medical marijuana program should be a felony. The state should only have 20 dispensaries. The law should sunset in five years. There should be no timeline for implementation. Post traumatic stress and traumatic brain injury shouldn’t qualify. Alzheimer’s, ALS, and muscular dystrophy shouldn’t qualify. Cancer and HIV/AIDS patients shouldn’t qualify to treat the pain, nausea, and wasting associated with their medical treatments. Doctors recommending marijuana should be subject to overrides by the Department of Health.

Gov. Cuomo makes these demands today, the last day before the bill could be brokered for compromise in order to make the legal three-day window for signing before the end of the legislative session on Thursday. So what’s it going to be, advocates? Compassion dictates we make tough political choices for the sickest, right? Have our opponents finally marched us deep enough into the Box Canyon for some of us to recognize that another “win” is actually a loss? 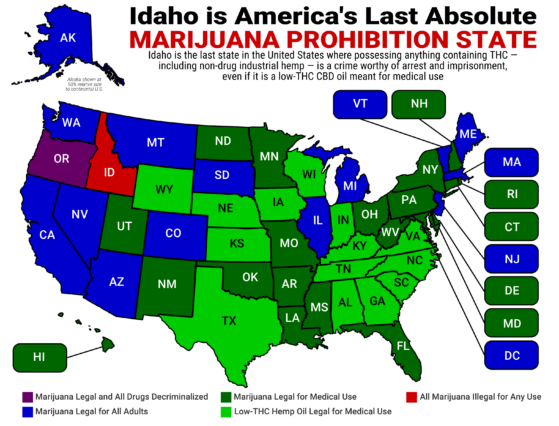