Styx Should Be in the Rock & Roll Hall of Fame

Another set of nominations are in for the Rock & Roll Hall of Fame, and once again, the greatest rock band of the late 1970s, Styx, is ignored.

Don’t you roll your eyes at me! Open your mind and let me make the case for why Styx belongs in the Rock Hall just as much as The Doobie Brothers (2020 inductees) or any other classic rock band already in the Hall.

(Also, Styx, some would argue, is actually rock and roll, unlike, say, 2020 inductee The Notorious B.I.G. – but we’ll disregard the genre arguments and strictly focus on 70s-era popular classic rock bands.)

Let’s start by examining the Rock Hall’s mission when it comes to inducting performers.

Honoring bands or solo artists which demonstrate musical excellence. Such a descriptor includes (but isn’t limited to) influence on other performers or genres; length and depth of career and catalog; stylistic innovations; or superior technique and skills.

Let’s start with the objective considerations for the Styx Hall of Fame claim first: length and depth of career and catalog.

Styx has released new studio albums from 1973 (“Styx I”) to 2017 (“The Mission”) for a studio career spanning 44 years. (We’re only counting studio albums of new material, not live albums or greatest hits packages.)

Styx has released 15 new studio albums in that 44-year span.

We can’t say Styx hasn’t been around long enough or recorded enough albums. But what about the success of those recordings?

Short aside: The Rolling Stones blow away every other band in this list, with a 52-year career; 24 studio albums, all of which went Top 10, seventeen that went platinum, nine of which went #1; and 41 top 40 singles with 8 of them going #1.

I could point to Dennis DeYoung’s early embrace of analog synthesizers as a stylistic innovation, but for my money, Styx’s contribution to the rock oeuvre is crystal clear:

If you can think of any song before 1974’s “Lady” that fits the definition of a power ballad (starts mellow, rocks out at the end), please let me know, because to my mind, that’s the first one.

But not the last. Many of the bands in the Rock Hall have embraced the format, from Aerosmith (“Cryin'”), Kiss (“Beth”), Led Zeppelin (“Stairway to Heaven”), Lynyrd Skynyrd (“Freebird”), and Journey (“Faithfully”).

If you weren’t there for the late 1970s and early 1980s, you might not recognize how huge a band Styx was back in the day. My sophomore yearbook is named after “The Best of Times” from “Paradise Theater.” Their tours were always sold out. They were voted #1 band in America in a 1980 Gallup poll!

You know who else in our list of 28 Rock Hall classic rock bands put up four consecutive triple platinum studio albums? Eagles, Journey, Led Zeppelin, and Pink Floyd. That’s it. If you just count four triple platinums, consecutive or not, you only get to add AC/DC, Aerosmith, and The Rolling Stones to the list.

As far as I’m concerned, the Styx Hall of Fame claim is made on that statistic alone.

This involves a lot of personal judgment. Is Styx’s Tommy Shaw a guitarist of Led Zeppelin’s Jimmy Page’s or Lynyrd Skynyrd’s Gary Rossington’s caliber? Maybe. Is he a better guitar player than Kiss’s Paul Stanley or The Band’s Robbie Robertson? Absolutely.

Is Styx’s Tommy Shaw a more gifted singer than Queen’s Freddy Mercury or Heart’s Ann Wilson? Maybe. Is he a better singer than AC/DC’s Brian Johnson or The Rolling Stones’ Mick Jagger. Absolutely.

Is Styx’s Tommy Shaw also not a gifted songwriter? Styx hired him on the road at age 22 after the exit of guitarist John Curulewski. His song “Crystal Ball” becomes the title track of his first Styx album. He goes on to write “Fooling Yourself (The Angry Young Man),” “Man in the Wilderness,” “Never Say Never,” “Renegade,” “Blue Collar Man (Long Nights),” “Sing for the Day,” “Boat on the River,” “Too Much Time on My Hands,” “She Cares,” and “Haven’t We Been Here Before.” (Then he goes on to write “High Enough” and “Come Again” with Damn Yankees, as well.)

Tommy Shaw’s virtuosity has always been overlooked by rock historians. To my mind, he’s one of the best triple-threat guitarist-singer-songwriters America has ever produced.

Nobody is going to mistake The Godfather of Styx, James “JY” Young, for a great rock vocalist. But he did pen many of the harder-rocking Styx tunes, like “Midnight Ride,” “Miss America,” “Great White Hope,” “Eddie,” “Snowblind,” “Half-Penny, Two-Penny,” “Heavy Metal Poisoning,” and “Heavy Water,” and he is one hell of a rock guitarist, every bit the equal of Tommy Shaw. He’s also taken to singing some of Dennis DeYoung’s vocals from classic Styx hits.

If we have to judge the rest of the original Styx lineup – keyboardist Dennis DeYoung, drummer John Panazzo, and bassist Chuck Panazzo, it would be harder to cite superior musical technique. The Panazzo Brothers were workmanlike in their rhythm section, but certainly nothing that will make you forget Geddy Lee & Neil Peart of Rush. DeYoung is a wonderful singer and keyboardist, if a bit too Broadway for my liking, but he’ll never eclipse someone like The Allman Brothers Band’s Gregg Allman or Genesis’s Tony Banks.

But if we get to compare the modern lineup, the Styx Hall of Fame claim is even more improved, because you’d be hard-pressed to find a band with greater musical technique.

Lawrence Gowan has taken the keyboard duties from Dennis DeYoung. His voice is every bit as clear and melodic as DeYoung and his keyboard virtuosity and performing style (he’s got a keyboard on a swivel) will make you forget DeYoung ever existed.

Ricky Phillips has taken on the bass duties from Chuck Panazzo and added so much more to the simplistic lines you may remember from Styx’s hits.

But the clearest leveling up done by Styx this century is the addition of Todd Sucherman on the drums for the late John Panazzo. As the son of a drummer and bass player myself, I do not exaggerate when I say I will put Todd Sucherman up against any drummer not named Neil Peart.

Then there are the cultural considerations when it comes to the Styx Hall of Fame proposal. Certainly, Styx has left its mark on pop culture – their hit “Come Sail Away” is the favorite of South Park’s Eric Cartman and still one of the most played songs at funerals. The song was also featured in the Adam Sandler film, “Big Daddy.”

Other movies to feature songs by Styx include Adam Sandler’s “Billy Madison” (“Renegade”), the Will Ferrell’s “Old School” (“Lady”) and “Anchorman 2: The Legend Continues” (“Babe”), and Mike Meyers’ “Austin Powers: Goldmember” (“Mr. Roboto”), Speaking of which, has there ever been any Japanese phrase more indelibly inked in Gen-Xers’ minds than “Domo arigato, Mr. Roboto?”

Most of all, Styx is truly a band. There is no “lead singer” in Styx, like there is in The Rolling Stones, Deep Purple, Led Zeppelin, or AC/DC, someone whose only duty is to sing lead vocals. Tommy Shaw, James Young, and Lawrence Gowan all sing fantastic lead vocals while playing their instruments. They blend amazing four-part harmonies with Ricky Phillips joining in. Only Fleetwood Mac, Chicago, and Eagles compare as multi-instrumentalist multi-vocalist classic rock bands.

The Styx Hall of Fame Case is Clear 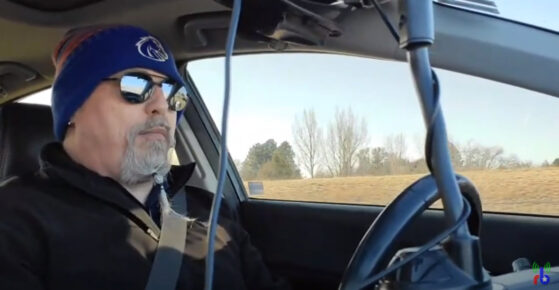