Well, the election went great for us, didn’t it? We picked up four new legalization states, with California not only becoming the world’s largest economy with legal weed, but breaking Oregon’s previous record of 56.11% support with a 56.20% victory.

We picked up three new medical marijuana states, with Florida and Arkansas opening up the South and North Dakota being the first in the Great Plains. Montana also re-affirmed support for medical marijuana dispensaries and easier access for patients.

We even got four out of five cities voting in Ohio to depenalize the possession of up 200 grams (7 ounces!) of marijuana – it’s still a minor misdemeanor, but the punishment is a zero dollar fine and zero days in jail. We also got a social use licensing measure passed in Denver that will allow any business to permit cannabis consumption onsite with neighborhood approval.

But we also got President-Elect Trump.

Now I’ve had a decent number of people telling me that having Trump as the leader of the free world with access to nuclear codes could be a good thing for marijuana. He’s a business guy, they tell me, so he’s all for a new big profitable economy. On the campaign trail, he said medical marijuana was fabulous and states should be allowed to pursue legalization. It’s all good, bro!

Yeah, except for the nightmare I keep having.

It begins with the appointment of Attorney General Rudy Giuliani – the patron saint of “stop and frisk” in New York City. Giuliani’s belief in the discredited “broken windows” theory of policing led him to have NYPD pursue as many marijuana violations as possible, leading New York at its worst to secure over 50,000 marijuana arrests a year.

It continues as I imagine the rest of Trump’s Administration filling up. Perhaps a DEA Administrator Chris Christie and a Director of Office of National Drug Control Policy (Drug Czar) Kevin Sabet. Then throw in some hard-line conservatives to head up FDIC and FinCEN that will decide pot banking issues; IRS and Consumer Protection Bureau heads to mess with pot business taxation and complaints; EPA and Ag Dept leaders who will deal with cultivation issues; and various US Attorneys and Immigration and Homeland Security officials who’ll deal with interstate and international considerations.

Most terrifyingly, I imagine who Trump appoints to fill an empty Supreme Court seat (and perhaps Ginsburg’s, Kennedy’s, & Souter’s seats as well) that will decide challenges to legalization. Remember Kansas and Oklahoma suing Colorado, only to be rejected by the court? Don’t bet on that rejection happening in the next interstate lawsuit that comes up before a 7-2 Trump-packed SCOTUS.

But Trump is for states’ rights, right? Sure he is – at least as much as you can say Donald Trump has a political philosophy. However, I can imagine a whole bunch of federal interference that would still allow states their right to legalize weed.

“States may be the laboratories of democracy,” says Attorney General Giuliani, flanked by DEA Head Christie and Drug Czar Sabet in my nightmare, “but we are going to ensure the experiment stays in the petri dish. Colorado and California may have legalized marijuana, but Kansas and Arizona have not. The citizens of those states deserve their states’ right to keep dangerous drugs illegal, too.”

“Operation Petri Dish is our response to these states that have chosen to allow marijuana legalization,” says Administrator Christie in my nightmare. “We have teamed up with Homeland Security to create a new series of border checkpoints along Idaho’s, Nevada’s, and California’s eastern borders, Maine’s southern border, and surrounding Colorado and Massachusetts. Staffed by DEA personnel no longer needed for investigations and raids in the West, these checkpoints will act much like California’s fruit and vegetable checkpoints. DEA, along with marijuana-sniffing dogs purchased with Justice Assistance Grants from the eight states where they can no longer operate because of legalization, will ensure that the states that have legalized marijuana keep it confined to their borders.”

In the next few months, Drug Czar Sabet tours the country, hitting the states that have the initiative power, but haven’t yet legalized marijuana or allowed medical use. “It’s time to see the handwriting on the wall,” Drug Czar Sabet tells various governors and secretaries of state and legislative leaders. “Either you can pass legislation to temper prohibition to your liking or you can wait for the citizens to vote in a disastrous legalization or medical marijuana law you can’t control.” Dubbed Operation Ohio, Sabet gets the remaining initiative states to pass restrictive no-home-grow dispensary-controlled medical marijuana laws and to decriminalize personal possession with fines and mandatory rehab, to diminish popular support for any citizen initiative in the future.

That’s my Trump marijuana nightmare. And it’s only the fifth-scariest of my Trump nightmares.

But I could be wrong. I hope I am wrong. I am praying to my non-existent Supreme Deity that I am wrong.

Duterte has said that he will close the Congress of the Philippines if it tries to impeach him.

Duterte has said that he plans to pardon himself for mass murder, as well as issue additional pardons to policemen and soldiers accused of abusing human rights.

his annulment from Elizabeth Zimmerman was caused by his alleged narcissistic and anti-social personality disorder.

Duterte made a joke about a friend who is physically disabled and a senior citizen. He implied that because of their condition, his friend should just commit suicide.

“Was I mad because she was raped? Yes, that’s one of the reasons. But she really was beautiful. The mayor should have been first.”

So, who should you vote for in the presidential race? There are many issues on which to judge the candidates and many perspectives on the issues. At HIGH TIMES, we won’t delve into the foreign policy, economics, and social programs each candidate supports or rejects, but rather the subject you all want to know about. You may have seen the candidates, but have you seen the candidates… on weed?

Hillary Clinton: The Democratic former Secretary of State is decent on the marijuana issue, offering her qualified support for medical marijuana, though she still thinks the issue “needs more research”. Sec’y Clinton also believes marijuana should be rescheduled down to Schedule II, alongside cocaine, methamphetamine, and Oxycontin. She’s referred to Colorado and Washington legalization as “laboratories of democracy” and expressed support for the right of states to go forward with legalization, but stopping short of endorsing legalization at the federal level.

Bernie Sanders: As of press time, Senator Sanders was still pressing for the nomination at the July 25 Democratic convention. If he’s a viable candidate in November, Sen. Sanders would be great for marijuana reform. He believes states have the right to legalize for medical and recreational use, and he has sponsored the only bill in Congress to legalize at the federal level. He has also said he supports the legalization efforts in Nevada and California, specifically.

Donald Trump: The Republican nominee is probably the worst of the five candidates on the marijuana issue. He’s been all over the map on reform; in the 1990s he was saying we should legalize all drugs, but as a GOP candidate, he opposes adult legalization. Mr. Trump has offered support for the right of states to set medical marijuana policies, however.

Jill Stein: The candidate of the Green Party is also highly regarded for her stance on marijuana reform. Dr. Stein supports the legalization of medical and recreational marijuana and has said she would remove marijuana from the federal Schedule I designation that treats it like heroin, LSD, and PCP.

You know we’ve come a long way when all the candidates support state-level medical marijuana programs and only one doesn’t support state’s rights for legalizing recreational marijuana. 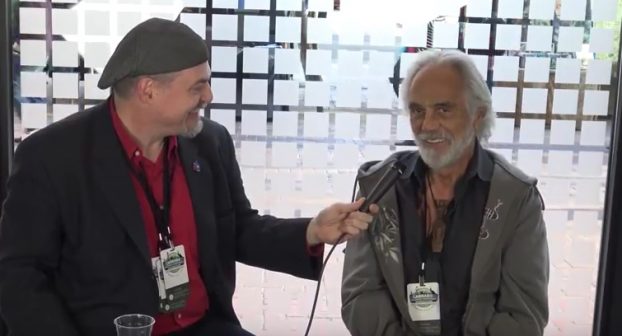 I got the chance to sit down with cannabis legend Tommy Chong at the International Cannabis Business Conference in San Francisco. Chong, 77, is parlaying his cannabis celebrity into a new brand, Chong’s Choice, as well as co-hosting a podcast with his son, Paris, to be hosted on CannabisRadio.com.

I asked Tommy about the state of marijuana and politics, beginning with the Republicans. “I love Donald Trump,” Chong told me, “he personifies everything the Republican Party is about.” When asked about the unexpectedly exciting battle between Hillary Clinton and Bernie Sanders on the Democratic side, Chong replied, “We’ve only got Bernie.” We also discussed the upcoming battle to legalize marijuana in California, with Chong lending his support to any form of legalization that makes the ballot.

Get New Rants by Email

'Radical' Russ 🌹 Trump is Evil So Biden Will DoFollow

Finally, the animated Marijuana States of America map I've always wanted to create! Every year = 1 second, so in 2 minutes, you'll be up to date!*

*Reply with any corrections

He served 8 months because he was a Black man playing air guitar at a gas station to the loud music from his car, showed his medmj card to a curious White cop, who then chose to charge him with a felony rather than misdemeanor, assuming weed was for sale. https://t.co/OUzUGfAPrP