On Election Eve, northeastern state medical societies are making their final plea to voters not to approve a cheap and effective herbal alternative to their overpriced pharmaceuticals.

The state medical societies of Delaware, New Jersey, New York, Ohio and Pennsylvania just teamed up to tell governors and voters not to legalize marijuana.

“The cost to the public health system from cannabis use will likely far outweigh any revenues.”https://t.co/zBG2yG2vur pic.twitter.com/hemwwO1qMS

“We are very concerned that the long-term public health costs associated with hospitalizations and treatment for psychiatric/addictive disorders could significantly outweigh any revenues that these states anticipate would be received from the legalization of cannabis,” Marijuana Moment reported the medical societies said.

I heard these same arguments from Kevin Sabet so many times I named it “The Sabet Conjecture.” He always framed it in comparison to alcohol and tobacco, the idea being that if alcohol and tobacco only rake in one-tenth the tax revenue compared to their costs to society, imagine what the costs from legal marijuana will be!

We don’t have to imagine anymore.

First off, marijuana ain’t alcohol or tobacco. Those drugs are toxic and addictive; marijuana is neither.

Second, whatever tax revenue you reap from legalized marijuana is guaranteed to be greater than the zero dollars brought in under prohibition, and far greater than the negative dollars lost trying to enforce it.

Third, and most importantly, it’s not 2012 anymore. Eleven states have legalized marijuana. None of them are even remotely thinking of repealing that.

If the dreaded legal marijuana costs were so great, where’s the popular campaign for restoring prohibition?

Let’s take alcohol and tobacco out of the mix and just talk about marijuana.

Let’s assume that there is a cost to society from marijuana use.

Well, then, that cost exists independent of its legal status, doesn’t it? If you’re claiming pot causes some sort of productivity losses, traffic accidents, or health care bills to justify those costs, they exist whether the person smoked a legal joint or an illegal joint, right?

We don’t even have to mitigate that cost with offsets for how much less cop and court and jail and probation and parole time we eliminate through legalization, nor must we calculate benefits from people switching from alcohol or prescription drugs to cannabis, reductions in stress, and medical effects. Even if we only assume cannabis is all bad, it still makes sense to legalize it.

Legalization makes sense even if marijuana were all bad.

If those marijuana costs exist in prohibition, they’ll continue to exist in legalization. All legalization is responsible for is offsetting the extra costs added by legalization.

If that extra 6% boost is due to legalization, then that’s all legalization has to cover. The other 12% presumably would’ve kept smoking marijuana illegally, and we were already bearing their costs before legalization.

In 2018, the State of Oregon reported about $109 million in marijuana tax collection statewide.

That means that in 2018, marijuana use had to have costed the state at least $109 million before it is a losing proposition.

There were 668,000 monthly tokers in Oregon in 2018. About 273,000 of those are the new tokers since legalization (2018 numbers minus 2013 numbers). Divide them into the $109 million and we must presume a monthly toker costs the state over $400 apiece annually, if we’re looking for costs to outweigh tax revenues.

Does that sound a bit outlandish to you?

A toker, more costly than a drinker? I think not.

According to a 2006 survey by ECONorthwest, “Alcohol dependence alone cost Oregon $3.2 billion in 2006, compared to only $3.95 million earned in tax revenues from the sale of alcohol.”

There’s a lot of apples and oranges in this comparison — old 2006 alcohol cost data vs. new 2018 marijuana cost guesses — but the difference is billions vs. millions, even with the worst scenario predictions for marijuana.

Common sense tells us that alcohol — with its contributions to traffic fatalities, organ disease, and cancer — must be a far greater cost to society than marijuana, no matter what marijuana’s cost.

And alcohol only collected a few million in tax revenues while marijuana collected over $100 million?

It should be clear to anyone with common sense and a calculator that marijuana legalization does far more to mitigate any imagined harms from marijuana use than does criminal prohibition.

While Pacific Northwest Bans Cannabis Cafés, Six Other States Will Legalize Them 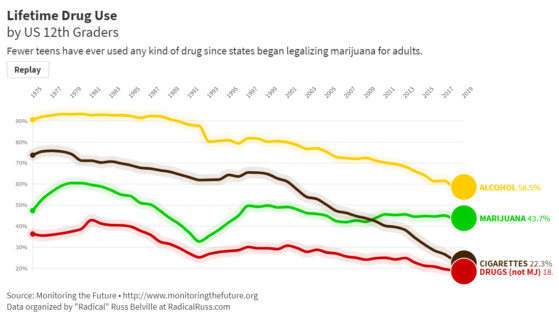