PrevPreviousThe Diminishing Returns of Legalization
NextGanja & The Gridiron: The NFL Has a Marijuana ProblemNext

Liberal firebrand Michael Moore has written an incredible essay on why Donald Trump will be the next President of the United States. It is an expansion on a riff he delivered recently on Bill Maher’s HBO program, about what Moore calls “the Rust-Belt Brexit”.

I believe Trump is going to focus much of his attention on the four blue states in the rustbelt of the upper Great Lakes – Michigan, Ohio, Pennsylvania and Wisconsin.

Trump is going to hammer Clinton on this and her support of TPP and other trade policies that have royally screwed the people of these four states.

And this is where the math comes in. In 2012, Mitt Romney lost by 64 electoral votes. Add up the electoral votes cast by Michigan, Ohio, Pennsylvania and Wisconsin. It’s 64. All Trump needs to do to win is to carry, as he’s expected to do, the swath of traditional red states from Idaho to Georgia (states that’ll never vote for Hillary Clinton), and then he just needs these four rust belt states. 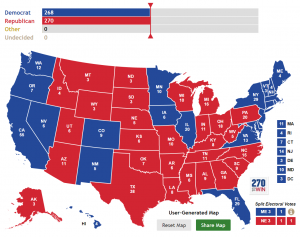 It’s a pretty compelling prediction, especially now as Hillary Clinton has chosen Tim Kaine as her VP, a man who was praising the Trans-Pacific Partnership as recently as last Thursday. There is reason to believe that Clinton may be able to flip North Carolina’s 15 electoral votes, but there’s equal reason to believe Trump could flip New Hampshire, Iowa, and Nevada to make up 16 electoral votes.

But now we have new polls out of Utah showing the three-way race between Trump, Clinton, and Libertarian Gary Johnson to be a statistical dead heat. Utah’s super-majority Mormon population does not particularly like the Muslim-bashing, twice-divorced, profane Trump. 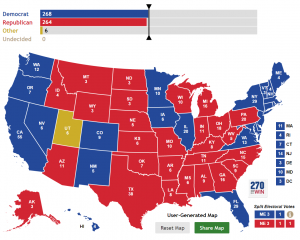 If the election goes the way Michael Moore predicts with the “Rust-Belt Brexit”, the 6 electoral votes Gary Johnson could win in Utah would deny both Clinton and Trump the presidency.

When the House votes, however, each state gets just one vote. The House delegation – each state’s representatives – hold a vote to determine how their state would vote. In a normal election, you’d expect the states to choose the candidate based on the partisan makeup of that state’s delegation.

The makeup of the state delegations to the United States House of Representatives, sorted from most Democratic-dominated to least.

The problem for Hillary Clinton is that there are only 14 states and DC that have Democratic-dominated delegations. There are 33 Republican-dominated states and 3 that are ties. The person who gets 26 votes among the states becomes the President.

So Donald Trump becomes President if Gary Johnson wins Utah? Not so fast. If the GOP establishment that hates Donald Trump recognized their opportunity, they could deny both Hillary Clinton and Donald Trump the White House.

If Johnson wins Utah, there’s heavy pressure for Utah’s four Republican congresspersons to choose Johnson. He needs only three of their four votes. Even if he gets two congresspersons, he’s deadlocked the state and taken out it out of the Trump column.

With Utah out, Trump is down to 32 Republican delegations, needing 26 for the win. That’s when GOP leadership could be working to find individual districts in which Johnson did well or Trump did badly and then pressuring that district’s congressperson to select Johnson.

House delegations that could be flipped from Trump to Johnson or declared a tie by flipping one congressperson, and Utah voting for Johnson.

Looking for seven states to flip, the GOP could start with the 5 red states that have only one congressperson – Alaska, Montana, Wyoming, North Dakota, and South Dakota. In another 4 red states – Arizona, Colorado, Nebraska, and Idaho – flipping one vote deadlocks that state. With many of these states in the libertarian-leaning Intermountain West and Northern Plains, picking off 7 out of the 18 Republicans in those states wouldn’t be impossible.

With the House then set at 25 Trump states, 14 Clinton states, and 11 states either for Johnson or tied, the House deadlocks on choosing a President. When that happens, the Vice President chosen by the Senate becomes Acting President after January 20, 2017. Since each Senator gets one vote, the Senate is currently 54-46 Republican, and the top two VP finishers will be Tim Kaine and Mike Pence, the GOP would get to inaugurate President Mike Pence.