Why Are They Jailing A Pot Doc In Colorado

Why Are They Jailing A Pot Doc In Colorado?

CBS Local Denver reported the story of Dr. Joseph Montante this week. He was convicted in a Colorado court of recommending medical marijuana to a patient without first establishing a bona fide doctor-patient relationship. Dr. Montante was stripped of his medical license and sentenced to thirty days in jail and three years of probation.

In Colorado.  Where marijuana is legal for recreational purposes. So, why exactly do we need to jail this man and ruin his career?

Law enforcement brought down this nefarious threat to society by sending in an undercover officer to get a recommendation from Montante. Yes, less than half of all violent crimes and less than a fifth of all property crimes lead to an arrest in America, but we’ve got all the police time and resources we need to conduct undercover stings on pot docs in a legalized pot state.

No, of course there is more to it than making sure a healthy person who can buy illegally, have an ounce and grow plants isn’t faking it so he can buy legally, have two ounces and grow the same number of plants. I had forgotten the most important factor in this equation: the children.

“Drug investigators say the doctor’s supervision is incredibly important,” reports CBS Local Denver, “because although 18 to 21 year olds are not eligible for recreational pot, they are eligible for medical marijuana.” Aha! So we had to jail this pot doc and ruin his career to protect college kids from seeing a doctor and paying the state for a privilege they attain 1-to-3 years from now. I got it.

Except, if you think about it, there has always been an incentive for 18-20 year-olds in Colorado to get a red card. Their recreational use was just as illegal before Amendment 64 as it is now. It’s just less incentive now, because young people that age often have 21-year-old friends. So long as everyone hands their weed to the 21-year-old and it’s all less than an ounce combined, nobody’s going to jail. 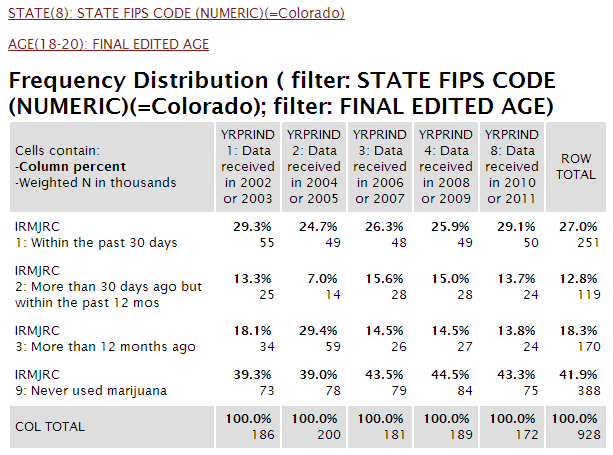 Looking at the National Survey on Drug Use and Health, I found that in the 2002-2003 survey, 29% of 18-20 year-olds smoked pot monthly and another 13% smoked pot annually. In the most recent 2010-2011 survey, a tiny bit fewer smoked monthly and a tiny bit greater smoked annually. But surprisingly, young adults who didn’t ever try pot increased 2.6 percentage points.

During that time, the number of people with red cards increased dramatically. It doesn’t appear as if that changed young adult use any. So what is the huge emergency that required an undercover sting and the imprisonment of a doctor?

The concern for the children seems like a rationalization to me. It’s not like they sent in 21 Jump Street to investigate the doctor. The daring undercover detective assigned to the case lied to Dr. Montante by claiming “he hurt his ankle several years ago playing basketball in high school.” “Several” is generally thought of as more than three and less than ten and high school age is fourteen to eighteen. My guess is that the detective didn’t present an identity under the age of 21.

Once pot shops open in Colorado, I can’t really see much reason for a recreational system to run alongside a medical system, especially as the medical dispensaries get first dibs on becoming the pot shops. Yet Colorado is going to be running two completely separate systems, to the point where a combination medical/recreational shop will have to maintain two completely separate lines of inventory and tracking. We just can’t have a gram from a White Widow medicinal plant getting mixed up with a gram from a White Widow recreational plant, because then, um, zombie apocalypse?

Since every home grower can keep the results of his or her harvests, recreational or medical, there’s really no limit to the medicine a patient could keep on hand. There’s no real incentive for the heavy chronic recreational user to “go medical” because he or she can grow and keep all that’s needed. But so long as a separate medical system is maintained, somebody has to be the gatekeeper, and we’ll keep seeing stories of doctors doing time because courts didn’t think their examinations of an undercover cop was thorough enough.

The Disaster of CBD-Only Legislation