This just in from our friends in Boston – it appears anti-pot legalization leader Kevin Sabet may have committed crimes and endangered children by carelessly letting a bag of marijuana gummy bears go missing at a public event:

(Boston Pot Report) Just got back from the WGBH panel on legalizing marijuana in Mass. Kevin Sabet, the former mini-me to a handful of Drug Czars, brought a couple big (more than one ounce) bags of candy, and challenged the audience to tell which one was infused with cannabis.

After his puppy-and-pony show trick, I saw him looking around nervously, saying, “Someone stole the edibles.” 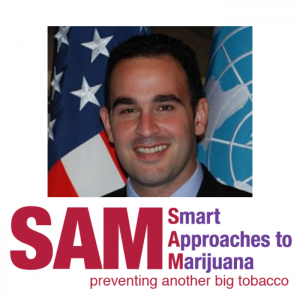 Kevin Sabet is a former advisor to Drug Czars in the Bush and Obama Administrations, and founded the anti-legalization group, Project SAM

WeedNews has contacted numerous attendees at the WGBH panel who confirm that Sabet, the so-called “quarterback of the anti-legalization movement” who heads Project SAM, indeed presented two large bags of candy to the audience, and claimed one of bags of candy was the THC-infused kind an adult can purchase in legal marijuana states.

From one witness via online chat who wishes to remain anonymous, but WeedNews can confirm as authentic via multiple witnesses:

(Anonymous witness) He made a show of pulling two bags of candy out of his pockets — both more than an ounce — claiming that one of them was infused, and asked the audience to tell him which was which. (I resisted the urge to say, “Give me three gummies from the bag on the left, and I will tell you in an hour.”)

Anyway, he put them on the dais behind him, and continued the panel for another hour. Then, when they were done, he went to circulate among the crowd.

When he returned to the dais, the bags were gone. He was panicking, saying,“Someone stole the edibles.” He was searching the area, and asked if the cameras were still on, and if he could check the tape.

(WGBH) Kevin Sabet: I brought some props, if that’s okay.

I think parents should ask themselves whether they can tell which bag of candy here is marijuana and which one isn’t.

Well, you can try them if you want, Jim. Maybe afterwards.

If you can tell, if you can’t tell, which you probably can’t, I bet you your kid can’t tell, either. When these things are lying around – the reason the emergency admissions in Colorado for kids under five (and I don’t think Andrew would dispute this) has gone up significantly, uh, doubled, is because these kinds of things are lying around that are marketed – of course they’re marketed to young people, and young people are ingesting them.

They are essentially – again, one of them is real and one of them isn’t – they are the real candy here [motioning at gummy bear bag] that are simply sprayed with THC. And there’s no way to tell the difference.

And that’s what Massachusetts voters are voting on. I don’t care if an adult wants to smoke marijuana, they shouldn’t go to prison for it, either. But do you really want to legalize these – I’m not even sure NORML wants to do that. I mean this is for people who want to make a ton of money in Massachusetts. They don’t make it by selling joints to baby boomers or 65-and-older, I hate to break it to you. They make it by making these candies and making them available to young people. 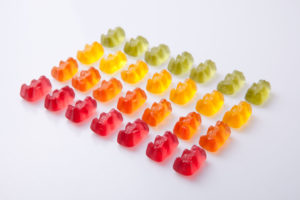 Can I tell which of these gummy bears are medicated? Sure, just give me an hour.

Now, whether the one of the bags of candy was actually marijuana-infused is unknown, but either way it puts Kevin Sabet in a very awkward position.

If the bag was just plain old candy, then Sabet was lying to the audience and his game of “guess the medible” was rigged from the start. Worse, under Massachusetts (and most states’) laws, possession of fake drugs (called “counterfeit substances”) with intent to deliver is a crime.

(Massachusetts General Laws) Any person who knowingly or intentionally creates, distributes, dispenses or possesses with intent to distribute or dispense a counterfeit substance shall be punished by imprisonment in a jail or house of correction for not more than one year or by a fine of not less than two hundred and fifty nor more than two thousand and five hundred dollars, or both such fine and imprisonment. 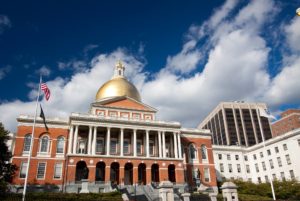 There must be a little-known codicil in Massachusetts General Law allowing rich white men to possess criminal amounts of Class C drugs.

These “counterfeit drug” statutes are used when someone sells aspirin she claims are oxycodone, or a bag of flour he claims is ecstasy, or plain old paper he claims contains LSD. Last year, just an hour away in Worcester, Massachusetts, a street dealer slashed a teenager after the young buyer realized he was being sold oregano the dealer claimed was marijuana.

If the candy was not medicated, Sabet certainly knowingly and intentionally possessed the candy, and the numerous witnesses and WGBH video have him claiming the candy to be an illegal drug under Massachusetts law (since Sabet is not a registered medical marijuana patient in the Commonwealth) and federal law.

Furthermore, Sabet not only had intent to distribute and dispense, he actually did so when he offered the bag to fellow panelist, Madeline Martinez, NORML Boardmember and founder of the World Famous Cannabis Cafe in Portland, Oregon. WeedNews spoke to Martinez by telephone shortly after the event in her room in Boston:

Madeline Martinez – I got to sit next to him on the panel the whole night. He’d say one thing and then later on, just contradict himself…

WeedNews – So, did you see Kevin Sabet display those bags of gummy bears and claim one of them was infused?

MM – Oh, yes, he was going on about the poison calls in Colorado, you know, all that “what about the children” stuff.

WN – And he handed one to you?

MM – Yeah, and then he put them on the table. 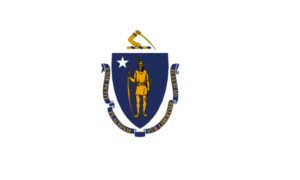 Marijuana gummies are illegal for non-patients in Massachusetts

So, at the very least, the man whose anti-legalization crusade focuses heavily on scaring the public about marijuana-infused gummy bears, fraudulently told the people of Massachusetts he was holding such a bag and then displayed it to a grandmother who believed it to be an illegal drug.

If the bag actually was marijuana-infused candy, Kevin Sabet broke numerous state and federal laws by possessing what’s estimated to be more than one ounce of an illegal marijuana product. Massachusetts punishes possession over an ounce of marijuana with a misdemeanor charge costing up to $500 and six months incarceration.

But marijuana-infused gummies aren’t “marijuana”, which is a Class D drug under Massachusetts law. Since the THC in medicated gummies would had to have been extracted from marijuana, and the law states that “any material, compound, mixture, or preparation, which contains any quantity of… tetrahydrocannabinols“, a prosecutor might decide that the gummies are a Class C drug. Sabet would then face the twice the penalty – $1,000 and a year incarceration. 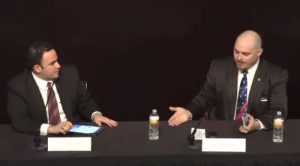 Kevin Sabet debates Russ Belville at the Baker Institute, May 2012.

There might also be additional charges since Sabet then transferred the Class C drug to Martinez. Distribution of Class C drugs is a felony in Massachusetts with a potential $5,000 fine and five years incarceration.

Then there are the federal crimes involved. Sabet’s former employer considers Sabet’s alleged bag of marijuana gummies to be Schedule I drugs. The penalty for possession of over an ounce is punishable by a $1,000 fine and a year incarceration. The penalty for distribution is the same. 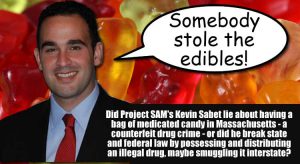 Finally, the question of where Sabet acquired the bag of illegal candy opens up the possibility of other crimes. Sabet wasspeaking in Arkansas yesterday in opposition to two measures that will let voters decide whether sick people should keep being criminalized if they use cannabis products like infused candy. Did Sabet acquire the illegal gummies through an illegal sale or transfer in Arkansas? Did Sabet violate Massachusetts drug importation and federal interstate trafficking laws by smuggling the drugs through two airports? Or did he acquire the criminal candies in Massachusetts through an illegal sale or transfer from a medical marijuana patient? And does the planning it took to make the acquisition amount to state and federal conspiracy charges?

What’s more, who stole Kevin Sabet’s edibles? That WGBH event was not limited to adults only. Through his negligence, Kevin Sabet may have endangered an adult or a child who may find the illegal gummies he’s always warning people about. A bag of gummies that had no labeling or marking designating it as medicated, or else his challenge to the audience to determine which was the medicated vs. unmedicated bag of candies would fall flat.

WeedNews is investigating further and will update this piece when and if Kevin’s bag of candy is found.

Updated to include video of the WGBH forum and transcript of Kevin Sabet’s remarks, plus editing to correct a misquote of Madeline Martinez, who answered that Sabet had handed her the gummies, when he actually just passed them by her to put them on the table behind the dais.