The newest Gallup Poll is out and for the first time ever recorded, people over the age of 65 support the legalization of marijuana.

Well over two-thirds of all Americans surveyed (68%) believe that marijuana should be made legal for all adults. That number has held at 66% or above for the past three polls.

The support for marijuana legalization has been above majority levels in nearly every demographic.

Majorities of Democrats and Independents have supported legalization since 2012. Now their support stands at 83% and 72%, respectively.

Education and income do not predict an opposition to legalization, with both college and non-college educated and rich and poor alike with about two-thirds support and over.

And now, one demographic that had consistently opposed legalization—seniors—are now convinced marijuana should be legal, at 55%.

This comports with data from the National Survey on Drug Use and Health showing seniors as the fastest-growing cohort of monthly marijuana smokers wince 2005, with an over 600% increase in their monthly toking rates.

The only demographics in America that still support prohibition, albeit barely, are conservative religious Republicans. Still, 49% of conservatives, 48% of weekly churchgoers, and 48% of Republicans are supportive of legalization.

You know, with these kinds of numbers, maybe we can hope for Drug War Joe Biden to get behind federal legalization of marijuana that four-out-of-five Democrats and 55% of the people his age support? 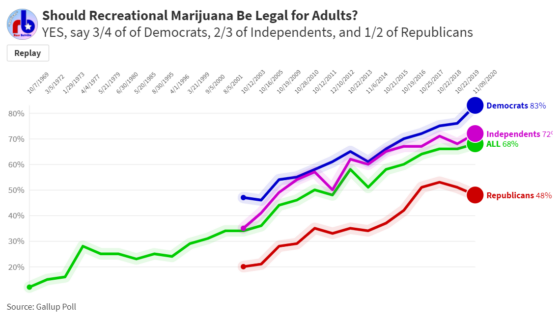