Idaho’s Drug Czar, Elisha Figueroa, has penned an op-ed in the Idaho Statesman entitled “Experiment with legalized marijuana isn’t working out.” I’m writing this open letter response to Ms. Figueroa, since she is too chicken to face opposition to her reefer madness in person.

Ms. Figueroa, I really wish you had kept your commitment to the Idaho Marijuana Town Hall back in January. You and two representatives of the Idaho State Police had agreed to come to Boise State University for a public discussion on marijuana legalization. The organizers spent considerable time and money to bring me in, along with a representative of Law Enforcement Against Prohibition and a Boise State Criminal Justice professor, to debate you,

I had just flown in and was being transported to the event when you, Ms. Figueroa, cowardly and shamefully cancelled your appearance at the event, mere hours before it was to begin. You expressed that you didn’t agree to debate “radical out-of-state speakers”, an oblique reference to me, “Radical” Russ Belville.

Nobody could understand what difference the home state of the debater should make, especially since you agreed to debate marijuana legalization and I am from one of the states to do so. If the stats you cite above and the prohibition you champion were defensible, it shouldn’t matter if your opponent is from Timbuktu. Given that Idaho remains one of only four states (ID, SD, KS, AR) to maintain absolute marijuana prohibition (no legal, no medical, no CBD oil, no decrim, no industrial hemp) and one of only three states (ID, WY, NJ) where merely being high in public is a misdemeanor, it’s no surprise they have to fly in out-of-state pro-marijuana speakers, because in-state ones would be risking their jobs, homes, and freedom if police target them. Hell, I merely flew in for a debate and ended up with cops at my hotel room door.

But judging by this opinion piece (largely copied from the Drug Czar’s scaremongering Rocky Mountain High Intensity Drug Trafficking Area report), it’s no surprise why you and the State Police chickened out. Reading the comments below, even amateurs with only a passing knowledge of cannabis and a Google feed are obliterating your arguments. You’d have faced the same with me, but live in person with a sharper wit and an audience of 200 laughing at you.

Since I can’t debate you live, I’ll have to do it through your writing, as I did back in January at Boise State, reading from the Idaho State Police position paper on marijuana and addressing your three empty chairs.

Coloradoans of all age groups (12-17, 18-25, 26 and over) rank first in the nation for past-month marijuana use. … After recreational marijuana was legalized there, Colorado youth’s past-month use for 2013/2014 was a whopping 74 percent higher than the national average.

So Colorado has more 12-17s, more 18-25s, and more 26+s smoking pot since legalization. Well, for those 21 and older, smoking pot is now legal. Not only could they be smoking pot more, it could be they always have and were reticent to tell pollsters they did something illegal. This is only a scary talking point if you think the state should stop adults from doing legal things. 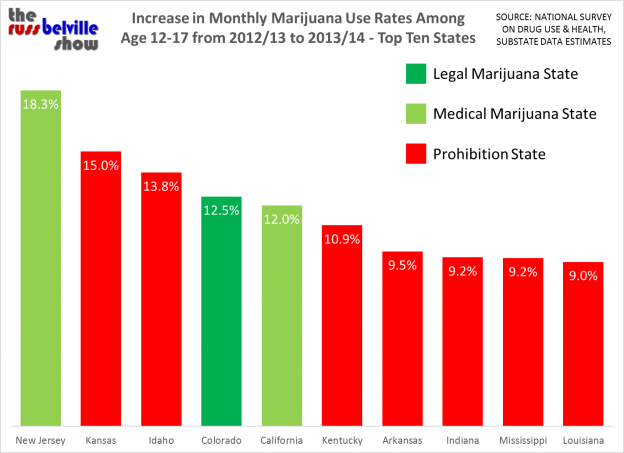 The number of Washington drivers with active THC in their blood in fatal driving accidents increased by more than 122 percent between 2010 and 2014. … The percentage of Colorado vehicle operators who were found positive for marijuana increased from 7.88 percent in 2006 to 24.03 percent in 2014.

Impaired driving… you don’t cite a single stat that shows an increase in impaired driving. You cite finding more drivers with marijuana metabolites in their system – a mark of merely being a pot smoker, not being high. You might as well cite that there are more married gay men in traffic accidents these days, too, since gay marriage was legalized. Even the National Highway Traffic Safety Administration you cite has stated since the 1990s on its marijuana fact sheet that it is “inadvisable” to try to determine impairment on drug testing alone. 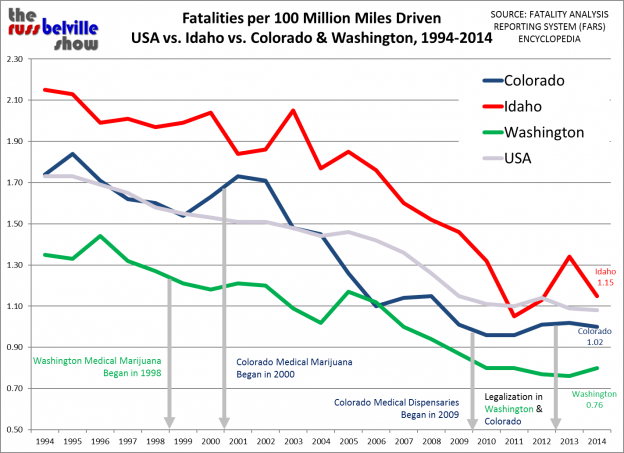 Instead, we do have stats that show that in Colorado (and Oregon, Washington, Alaska, and Washington DC) there are fewer fatalities per 100M miles driven than the US average of 1.08; Colorado sits at 1.02, a number it has hovered around since 2009 (when dispensaries opened); Idaho sits at 1.15. Colorado has been below the national average in fatalities since 2005; Idaho has been above the average every year since 1994, except 2011 & 2012.

Calls to Washington’s Poison Control Center related to marijuana-infused products increased 312.5 percent from 2012 to 2014, … The Colorado Hospital Association reported that marijuana-related emergency room visits increased from 8,197 in 2011 to 18,255 in 2014.

Your stats on poison control calls and ER visits suffer the same prohibition-related confounders as the stats on use – people don’t like to admit breaking the law. Before legalization when the doctor asked what your sick kid ate, you’d be less likely to admit it was your marijuana-infused goodies. Before legalization when you ate too much of the pot brownies, you’d be less likely to go to the ER or if you did, you’d lie about why you were there (“food poisoning”).

The U.S. Drug Enforcement Administration recently refused to downgrade marijuana from its federal status as a Schedule I controlled substance. Chuck Rosenberg, acting DEA administrator, stated, “This decision is based on whether marijuana, as determined by the FDA, is a safe and effective medicine. And it’s not.”

The only reason cannabis remains a federal Schedule I drug is because you cannot fit a leaf-shaped drug through the FDA’s pill-shaped hole. Everybody knows it has medical utility and 25 states – soon to be 30 – have passed legislation recognizing that. Everybody knows it is a safer substance than alcohol and every pharmaceutical and over-the-counter drug there is. As a matter of fact, Ms. Figueroa, marijuana is even safer than Famous Idaho Potatoes, a point made by DEA Administrative Law Judge Francis L. Young in the NORML v. DEA suit back in 1988:

In strict medical terms marijuana is far safer than many foods we commonly consume. For example, eating ten raw potatoes can result in a toxic response. By comparison, it is physically impossible to eat enough marijuana to induce death.

You’re on the wrong side of history, ma’am.