Legalization Is Reducing Teen Use and Access to Marijuana

Legalization Is Reducing Teen Use and Access to Marijuana 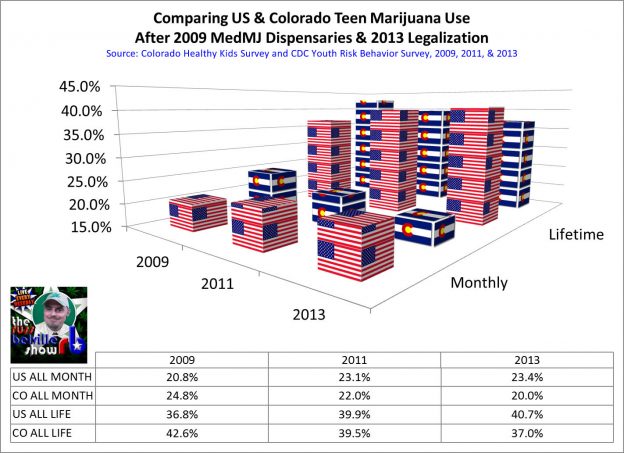 More telling are the trends since 2009, the year when Colorado began regulating its medical marijuana markets, and since 2011 when campaigns for legalization were getting underway. Regarding lifetime use, the figure for US teens rose almost 4 points while in Colorado it dropped more than 5½ points. Regarding monthly marijuana use, US teens are up over 2½ points while Colorado teens are down almost 5 points. 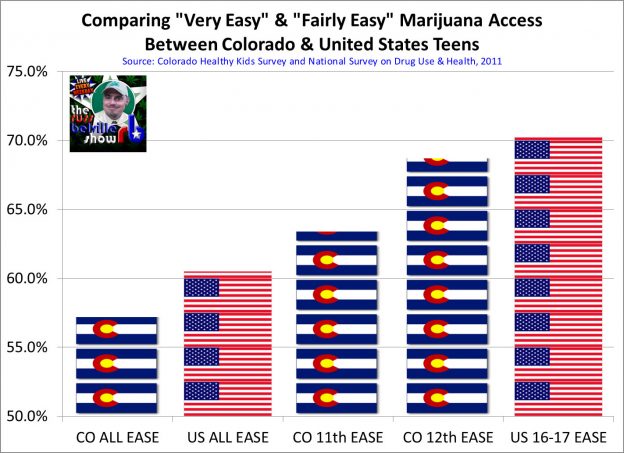 Legalization is also helping to reduce youth access to marijuana. Healthy Kids Colorado’s press release on the 2013 data did not mention it, but in 2011 57% of Colorado teenagers found it “very easy” or “sort of easy” to acquire marijuana. CDC does not track that statistic, but the National Survey on Drug Use & Health does, and their 2011 figures show over 60% of teenagers nationwide found it “very easy” or “fairly easy” to score some pot. Among older teens, Colorado 11th & 12th graders report over 63% and almost 69% with easy access, respectively, while NSDUH’s figure for 16-and-17-year-olds is over 70%

“Once again, claims that regulating marijuana would leave Colorado in ruins have proven to be unfounded,’ said Mason Tvert, the lead campaigner for Colorado’s Amendment 64 that legalized marijuana. “How many times do marijuana prohibition supporters need to be proven wrong before they stop declaring our marijuana laws are increasing teen use? They were wrong when they said regulating medical marijuana would do it, and they were wrong when they doubled down and said making marijuana legal for adults would do it.” 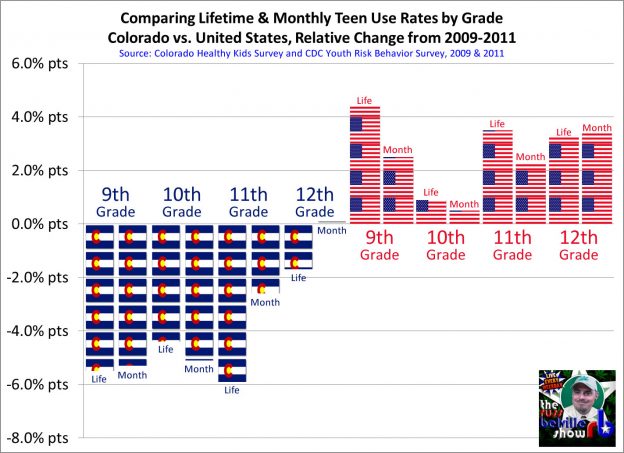 It appears that legalization’s impact on youth has the most effect at the younger grade levels. Colorado 12th graders had slightly lower lifetime use rates and a barely noticeable increase in monthly rates between 2009 and 2011, the two years where medical marijuana regulations were being successfully implemented. But lifetime and monthly use rates dropped an average of almost 5 points among 9th, 10th, & 11th graders. In contrast, all national grade levels experienced increases in both lifetime and monthly use, but 9th graders experienced the greatest lifetime increase (almost 4½ points) and the second-greatest monthly increase (2½ points). 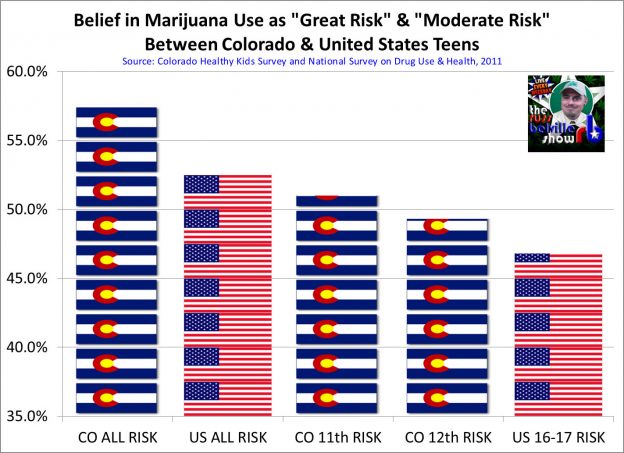 Another statistic of interest is the risk teenagers attribute to regular marijuana use. Healthy Kids Colorado says that almost 58% of teens in 2011 believed there was either great or moderate risk in the regular use of marijuana, a figure that has dropped to 54% in the preliminary 2013 data. The NSDUH shows that between 2010 and 2012, US teens perception of risk dropped from just over 54% to just over 51%. So while both Colorado and US teens learned the truth about marijuana and perception of risk fell similarly, more Colorado teens think pot smoking is risky compared to the nation. Among older teens in the 2011 surveys, 51% of 11th & 49% of 12th graders found marijuana use risky compared to almost 47% of US 16-and-17-year-olds.

* The CDC’s survey data do not include 2013 data for Colorado, Indiana, Iowa, and Pennsylvania; or any data for any year for California, Minnesota, Oregon, and Washington.

The Toughest Marijuana Laws in the United States

“Making a Murderer” Cops Shock You? Then You’ve Ignored the Drug War