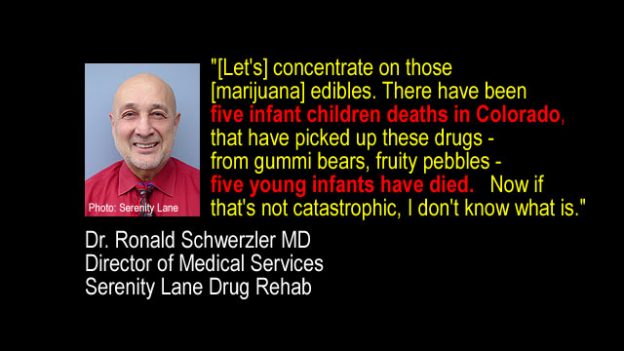 Up to the point where Dr. Schwerzler claimed five kids have died from medibles, the debate audience (by my estimation, about 60/40 pro-/anti-marijuana) had been subdued and respectful, save for one comment from DA Marquis that Oregonians grow far better marijuana than Mexican cartels, which generated some proud home-state applause.

But when Dr. Schwerzler first mentioned the five deaths, you could hear some muttering in the crowd. When he repeated what many must’ve thought was misheard, the dam burst. “Lies!” shouted the audience, with “Not True!” and demands for a “Source!?” also shouted out. Dr. Schwerzler reiterated, “Yeah, it is [true],” as you can clearly make out from the video of the event.

His debate partner, DA Marquis, quickly stepped in to try to mitigate the damage to the No on 91 campaign’s credibility, stating that marijuana was probably safer than alcohol and less addictive than cigarettes, to the applause of the crowd, and that nobody dies from marijuana toxicity. But Dr. Schwerzler never retracted his claim on the televised debate and the moderator never called him out on the untruth.

The next afternoon, however, our paper, The Oregonian, posted “Oregon marijuana legalization opponent admits he was wrong about children deaths“ where Dr. Schwerzler retracted his claim. “I really need to retract that statement because I can’t back it up,” said Schwerzler to reporter Jeff Mapes, who also wrote:

Peter Zuckerman, a spokesman for the Yes on 91 campaign, called it “yet another example of how opponents of marijuana reform have for 70 years been using misinformation and scare tactics” to keep the drug illegal. …

Schwerzler’s claim came as news to two well-known critics of Colorado’s law. Rachel O’Bryan of Smart Colorado and Bob Doyle of the Colorado Tobacco Education and Prevention Alliance, both said they didn’t know of any children’s deaths from accidental ingestion of marijuana edibles.

Dr. Schwerzler emailed a mea culpa to the heads of the No on 91 campaign, stating, “After our conversation today I realized that my statement about children’s deaths in Colorado is in error. There have been admits to ICUs for children who have eaten edibles and were hospitalized. I was in error and deeply regret any consequences of my actions. As a physician I make every effort to be honest with my patients and myself. When wrong I try to promptly admit it and make amends whenever possible.”

Somewhere, the ghost of Harry J. Anslinger is smiling.

What Happens to Medical Marijuana in 2016 (Part One)