I attended the Great Oregon Pot Debate on Tuesday. It was at Portland State University and televised live in Portland and on the web. It featured LEAP’s Inge Fryklund, a former prosecutor, and Richard Harris, a former state drug prevention head, vs. Josh Marquis, a district attorney, and a Dr. Ronald Schwerzler, rehab doctor.

During the debate (which, technically, was more of a town hall), questions were taken from three local reporters, the internet community through #YourVoiceYourFuture, and from the audience. This was my opportunity. I had followed Project SAM’s Kevin Sabet to seven cities across Oregon, trying to ask my question, only to be denied by the moderators who only took questions via 3×5 index cards. But with a live mic and TV camera just feet away, there was no stopping me from asking my question: 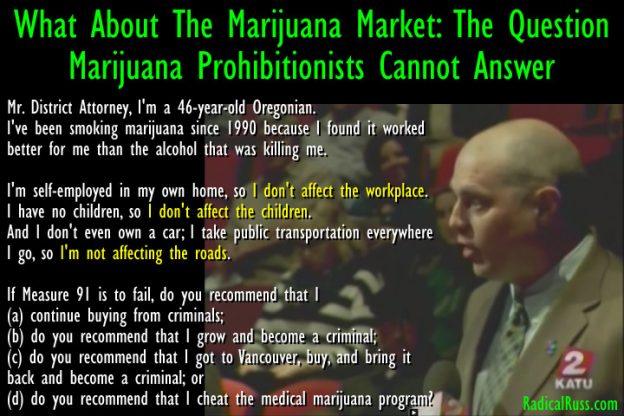 “You had the question of the night,” Jeff Mapes, senior political reporter from The Oregonian told me later, referring to the raucous applause my question drew, even causing the moderator to explain “they’re not cutting into your time” as the applause kept going. The reaction from the prohibitionists was telling. The district attorney, Marquis, punted on the question, saying “I’m going to let a doctor answer Mr. Belville’s question.” Because when there’s a legal question presented to a District Attorney, surely, a rehab doctor should answer it.

The funny thing about that reply? Neither I nor the moderator mentioned my name. Marquis is all-too familiar with me because I’ve been peppering his office with Open Records Requests to find out (a) how much federal grant money did county drug prevention officials spend on bringing Kevin Sabet in for an “educational” tour (answer: at least $21,000); (b) what is Marquis hiding in the Gmail account he uses for public business, but refuses to turn over to public records requests; and (c) how did Marquis decide to file marijuana DUI charges leading to a four-year prison sentence against a 19-year-old accident victim who had zero active THC in his system and that Marquis himself says, “In fairness, I can’t say this guy was entirely under the influence of marijuana. I think the jury wasn’t all that sure, either.”

But Dr. Ronald Schwerzler (the one who said “five young infant children have died” from marijuana edibles in Colorado) tried to not answer my question. He asked why I need to take a drug, as if he’d ask that of Marquis and his wife when they enjoy a Chardonnay. He explained that maybe I’m not the kind of person who gets addicted, but some people do, and smoking is bad, and we should deal with anxiety and stress naturally and not use a drug to dull the emotions.

However, Dr. Schwerzler had nothing to say about where to get my pot that District Attorney Marquis kept insisting is “no big deal” if you have less than 28 grams, because “it’s just like a speeding ticket” when you get a marijuana infraction in decriminalized Oregon. He even closed the debate with an anecdote about a guy making hash who gets a knock on the door from cops who then just tell him to call his grandma who was worried about him, and “that’s how law enforcement treats marijuana in Oregon.”

Why is Pot “Child Endangerment” But a Loaded Gun is Not