PrevPreviousBillionaire Marijuana Legalizer Peter Lewis Dies at Age 80
NextIncrease in US Marijuana Use Tied to Older Americans, Teen Use FlatliningNext

After writing on polls and statistics for the past few years I always find it funny how media will jump all over a press release from some police agency with some meager scraps of data in it and turn it into a five course meal of propaganda scaremongering.

The facts: The Washington State Patrol released preliminary data on positive THC blood tests from suspected impaired drivers for the first half of 2013. The crime lab reported 745 people tested positive for marijuana and of those, 420 tested above the state’s five nanogram per milliliter (5ng) THC limit…

Yes. Four hundred and twenty. So add the easy pot puns and stoner references to the media meal as dessert.

Continuing with the facts: In the past two years, the annual total each year for positive marijuana blood tests in Washington is about 1,000. In 2011, there were 506 tests >5ng. In 2012, there were 609 tests >5ng. Overall impaired driving cases, however, are on pace to hit the annual average of about 20,000.

Based on those data, we find the Christian Science Monitor proclaiming “Pot smokers arrested for DUI: A record high in Washington”. Well, that’s not exactly true. To get a blood test, cops must make a DUI arrest and get a warrant, and in years past, about 1,000 tested positive for THC. But before legalization, all those positive tests – at any amount, not just over 5ng – were evidence used to convict on DUI charges. Now, any test below 5ng is proof a driver was below the legal limit. The 420 tests above the 5ng limit work out to 840 DUIs for the year, below the 1,000 any-amount DUIs of the past.

How did about 1,000 pot positives a year to 745 pot positives in six months become a “three-fold spike”? Reading further, Medical Daily writes, “Those numbers compare to 1,000 such arrests over a two-year period prior to the legalization of marijuana for recreational use.” It seems the author misread a sentence from the original Reuters report that read, “By contrast, in each of the last two full years, about 1,000 drivers who were pulled over tested positive for THC,” and missed the crucial “each” part. So, take 1,000 for two years, divide by two, then compare your new 500 yearly total to the 745, which if you double to make six months into a year becomes 1,490, close enough to 1,500 to proclaim a “three-fold spike”!

Other media outlets are more subtle in their accentuation of the negative. The Reuters piece was reprinted in several media outlets, like the Chicago Tribune. It opens by pointing out the 745 drivers with positive pot tests, then notes that over half the tests were above 5ng, and then compares that to 1,000 positive THC drivers from 2011 and 2012. It’s what they leave out that helps to set the scary frame.

I requested the actual data from AP reporter Eugene Johnson who got it via email from Bob Caulkins, the Media & Community Relations Officer for the Washington State Patrol. Indeed, the rate of THC positive drivers has increased to 27.2% of all blood tests ordered, up from roughly 20% of all tests in years prior. However, the rate of positive drivers over the limit has actually declined from 2012. Where 61.6% of 2012’s THC positives were over the legal limit, it is so far 56.4% of 2013’s THC positives.

This still leaves us with a potential 840 >5ng THC positives for 2013, compared to just 609 in 2012. However, the number of tests being ordered has increased, on pace for 180 more than the prior year. It can also be true that cops are more likely to order a blood test in a pot case now. As Calkins told Huffington Post, “We’re testing blood we didn’t test before.” So do we actually have more stoned drivers on the road or are cops now just better trained and incentivized to go after them? Just because you’re catching more fish doesn’t mean there are more fish; you may just be using a bigger net, fishing longer hours, and picking a better spot to fish.

The real concern isn’t whether there are more drivers caught with THC in their system; that’s not terribly surprising given the state has legalized marijuana. The concern is whether harm has increased. On that front, we see in the various reports that the Washington State Patrol is on pace for their average 20,000 impaired driver stops, so it doesn’t seem like their seeing more impairment on the roads than before. The “on pace” suggests that they’re at about 10,000 stops over six months. So, out of 10,000 stops, cops only felt the need to order a blood test about a quarter of the time and found 420 people over the legal THC limit.

According to Washington State’s Traffic Safety Commission “Target Zero” data for 2013, the state is on pace to record 88 alcohol-related traffic fatalities and 80 THC-related fatalities for the year. Those would be the lowest figures for both for the last five years and a decline of 22% for alcohol and 30% for THC from 2012. Could it be that greater access to marijuana equals less abuse of alcohol, leading to lower traffic deaths from both?

It is certainly the case that stoned drivers are far better drivers than drunk drivers, but they are also far better than drivers using certain legal prescription medications. According to research published this year in the journal Accident Analysis and Prevention, drivers who tested positive for marijuana had an odds ratio of 1.81:1 of being in a fatal crash compared to a sober (1:1) driver. Those odds were 3.03:1 for narcotics like Vicodin, 3.57:1 for stimulants like Adderall, and 4.83:1 for depressants like Ativan, but each carries a warning on the bottle instructing users not to drive until they know how the medication affects them. None of those drugs carries any per se threshold in a blood test indicating automatic proof of impairment like cannabis and alcohol do. Alcohol comes in with an astounding 13.64:1 odds ratio for a fatal crash, so if some of those drivers are switching to the drug with the 1.81:1 risk, we should all be celebrating.

So, in summation, we have fewer people dying on the roadways, about the same amount of impairment detected on the road, more blood testing that has uncovered a lower ratio of pot-positive drivers testing over the new 5ng limit, and four-out-of-nine drivers who tested below the new 5ng limit have a legal defense to DUID charges they didn’t have the year before. Isn’t it interesting how mainstream reporting missed out on so many of these details? 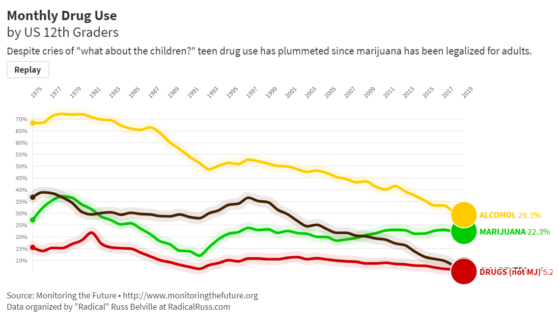 Will Ohio Legalize a Marijuana Monopoly?