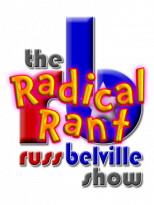 Welcome HIGHTIMES.com Reader to the Radical Rant. My name is Russ Belville and I host a live weekday podcast on marijuana reform on 420RADIO.org at 3pm Pacific, also available on iTunes and Stitcher Radio. On Tuesdays and Fridays, I’ll be bringing you this news, opinion, and Q&A column all about the fight for re-legalization of the plant we all love. You can reach me by email at russ@radicalruss.com with your questions and suggestions.

“A five foot by five foot home garden? That’s bullshit!” exclaimed the young man wearing the No on Prop 19 t-shirt. It was Election Day 2010 and I was covering the historic California vote on marijuana legalization for my radio show.

But these weren’t church ladies or drug rehabbers or cops or pharmaceutical reps or anyone else you’d associate with being anti-marijuana legalization. These were the kind of long-haired laid-back guys I’d normally share a joint with! It was the first time I’d ever seen the phenomenon I’ve come to call “Stoners Against Legalization”.

Oh, they had all their reasons. Prop 19’s 25-square-foot home garden provision was too small (so, what, zero legal square feet are better?) Prop 19 would establish a monopoly where you could only buy legal weed in Oakland (so, what, no legal places to buy weed are better?) Prop 19 would encourage the feds to come in and raid the shit out of medical marijuana (you mean like what happened after Prop 19 didn’t pass?) None of their reasons made much sense, other than the one they didn’t mention: legalized weed meant competition for dispensaries and illegal dealers.

Prop 19 didn’t pass and the Stoners Against Legalization in California were jubilant. “Now we can get ready for 2012 when we’ll put true legalization on the ballot!” As you know, that didn’t happen in 2012, in 2014, and it’s not necessarily a lock for 2016, either.

In 2012, legalization was on the ballot in Colorado and Washington. There was some Stoners Against Legalization in Colorado, with some vague complaints about over-taxation and over-regulation, but the real wailing was in Washington, where a confrontational dispensary-funded group called No on I-502 took root.

To be fair, Washington’s I-502 had some odious regulations. It mandated an unscientific five nanogram per se DUID. It legalized personal possession of marijuana, but not home cultivation. It set taxation levels far too high. But those arguments didn’t sway the majority and legalization happened in Washington State.

It’s still a bit of a hot mess in the Evergreen State – licensing was handled poorly, prices are still too high, the medical marijuana “wild west” is being tamed. But it has generally been positive: thousands fewer arrests didn’t happen, the prediction of mass stoner DUIs didn’t happen, and the state made some tax revenue.

In 2014, Oregon and Alaska had learned lessons from Colorado and Washington and crafted better legalization initiatives. Yet even in 2014, there were pockets of Stoners Against Legalization who moaned that the initiatives didn’t immediately free all the pot prisoners (won’t that be easier when their crime isn’t a crime anymore?) They complained that the initiatives don’t allow for enough home grow plants (again, zero is somehow better?) They complained that the liquor commission would be in charge of marijuana (rather than criminals and gangsters?)

Now in 2015, the Stoners Against Legalization are in Ohio, where a group is proposing a marijuana legalization constitutional amendment that makes the ten campaign funders the only commercial marijuana growers in the state. Some folks are furious about this, vowing to defeat this legalization proposal, because there is a better true legalization proposal coming along for the next election.

So, I am curious – what’s your legalization deal-breaker? For me, anything that reduces the arrests of people for possessing marijuana is worth voting for. Legalization means that marijuana isn’t contraband, which means it is no longer probable cause for a cop to mess with me if he or his dog sees it or smells it. If a cop knocks on my door and I answer it with a smoldering joint on my lips and our conversation ends with the cop leaving without me in handcuffs and without my joint, marijuana’s legal. If Kevin Sabet would vote against it, I’m voting for it.

But what is your take? Would you vote against a marijuana legalization initiative if it:

Send me your responses to russ@radicalruss.com and I’ll cover them in Friday’s column.

Sessions’ DOJ Really Wants to Bust Some Potheads… But Will They?