If the Democrats Nominate Hillary Clinton, We Get President Marco Rubio

If the Democrats Nominate Hillary Clinton, We Get President Marco Rubio

The latest results from respected pollster Quinnipiac University show that Senator Bernie Sanders, once down by 30 points nationally to Secretary Hillary Clinton, is now within just two points of the supposedly presumptive Democratic presidential nominee among voters who are Democrats or Democratic-leaning, and out-performs her against the three leading GOP candidates.

Feeling the Bern yet? Establishment Democrats sure are, as my colleague Anthony Johnson notes.

There are other numbers in this poll that spell doom for the centrist corporate occupation of the Democratic Party. 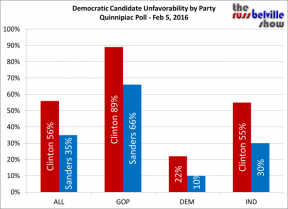 Fifty-six percent of the voters polled had an unfavorable opinion of Hillary Clinton, with just 39 percent favorable. A whopping 89 percent of Republicans view her unfavorably as well as 55 percent of Independents.

In other words, not even 2 in 5 voters like Hillary Clinton. And since just 3 percent of voters “haven’t heard enough” about her and only 2 percent refused to answer, there isn’t much room for change in these likability numbers. 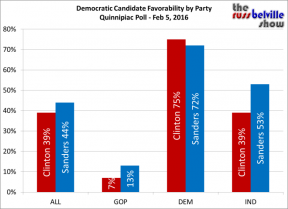 I’m betting the more the public hears, at least half of that 19 percent will begin to favor Sanders.

I’m betting the more the Democrats hear, at least two-thirds of that 18 percent will begin to favor Sanders. 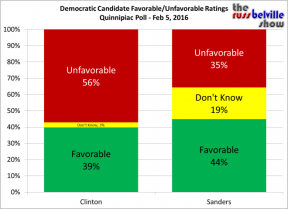 I’m betting Sanders will capture a fifth of the 19 percent of GOP and half of the 16 percent of Independents move in Sanders’ direction.

If the Democrats nominate Hillary Clinton, these are the numbers she’s stuck with, barring some political miracle that changes decades of public perception about her. She will motivate the Republicans, almost 9 out of 10 who dislike her, to turn out like no other candidate. Half the Independents don’t like her and even 1 in 5 Democrats don’t like her, which doesn’t bode well for her side of the get-out-the-vote effort.

What establishment Dems don’t seem to realize is that since 1993 when Bill Clinton first triangulated his way (literally*) into the White House, the party has lurched rightward and left behind much of the base. With Bill Clinton we got the Telco Act that consolidated television and radio into a few corporate hands, the repeal of Glass-Steagall that led to the 2008 crash, the crime bill that instituted 3-strikes and eliminated much of parole, the Dept. of Commerce actively working with Big Pharma to keep profits high, a more-than-doubling of marijuana arrests over his terms, NAFTA that sent American jobs abroad and opened the floodgates that built the modern Mexican drug cartels, and “an end to welfare as we know it” that put millions of mothers and children into deeper poverty.

It wasn’t Bill Clinton’s sexual escapades with Monica Lewinsky that cost Democrats the White House against the least-qualified Republican candidate ever in 2000. Much of it had to do with his Vice President being unable to energize his natural liberal base after Clinton turned the Democratic brand into Republican-Lite. How many times did Ralph Nader say there’s no difference between the corporate Democratic and Republican parties and how much more prescient does he seem now?

As for Obama, Mr. Hope-and-Change Democrat convinced many on the left that we’d be returning to some of those progressive principles. His incredible political talents combined with the fallout from the least-qualified Republican president in history enabled him to energize the base and generate what were then record-individual contributions and winning the presidency.

Obama outflanked Hillary Clinton, the establishment choice, on the left with grand, sweeping oratory that promised the best of progressivism would return to the Democratic Party. Yet she and the establishment Democrats still haven’t learned that there’s this untapped yearning for a real opposition party to the party of Big Business, Big Military, and Wall Street. They just can’t figure out how this Senator Sanders is doing so well with his grand, sweeping oratory promising the return of progressivism.

President Obama has achieved great successes that shouldn’t be overlooked, but he departed radically from the Campaign Obama as soon as he entered the Oval Office. Where was the investigation and prosecution of Bush-era torture? What happened to closing Gitmo? Why are we still drone bombing the hell out of the Middle East? Why do we still have soldiers there? Why are we still being spied upon? Yes, the Affordable Care Act is nice, but why was he so quick to cave on a public option? Why did none of those Wall Street bankers ever went to jail and why are their banks now bigger than ever? Why is the stock market is setting all-time records while we’re still laden with student loan debt and graduate degrees that get us nothing but dead-end McJobs?

Hillary Clinton now has decided to paint Bernie Sanders as the naïve dreamer, unprepared for the job she has worked for all her life, where she’ll continue keeping things a lot like they are under Barack Obama, the unprepared naïve dreamer she lost to in 2008, with maybe a few improvements she can eke out from Republicans and corporations.

If Hillary Clinton gets the nomination, the progressive left stays home and the regressive right comes out in droves.

The final damning nail in the Clinton campaign coffin from the Quinnipiac Poll is the hypothetical presidential match-ups question. Against the top three Republican contenders, Bernie Sanders outperforms Hillary Clinton. 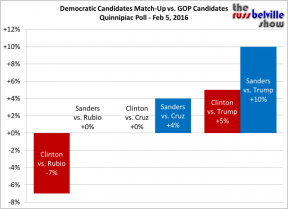 Donald Trump is Hillary Clinton’s only hope. In that matchup, she would win by 5 points. But Bernie Sanders doubles that win with 10 points over Donald Trump.

Against Ted Cruz, Hillary Clinton fights to a tie, but Bernie Sanders beats Cruz by 4 points.

But if the GOP gets smart (a big if) and nominates Marco Rubio, Hillary Clinton loses the election by seven points. The young Hispanic Rubio even fights Bernie Sanders to a tie.

If the Democratic party gets smart (a slightly smaller big if) and nominates Bernie Sanders, he ushers in a wave of progressive enthusiasm of which Barack Obama’s campaign only gave us a sample. Those down-ticket Blue-Dog Democrats that Clinton’s establishment cronies are warning will be harmed by Sanders at the top of the ticket will actually benefit from the energized turnout of voters previously disaffected by the rigged-system duopoly the voters have come to expect.

With his big win and the re-invigorated electorate demanding change, GOP members of Congress will have more pressure to work with a President Sanders. With that change also comes a change in perception for local and state Democrats that they don’t have to fear some of the old Cold War era anti-Democratic liberal smears.

Nominate Hillary Clinton and assuming she beats the Republican, we just watch as the rightward-tilt of the Democratic Party continues and another Wall Street bubble bursts with no Bush to blame it on. Wars in the Middle East will continue and new ones will be started, with American boots on the ground, no matter how many times Hillary Clinton says there won’t be – she’s never met a foreign hostility she didn’t engage.

And those GOP members of Congress, backed by 89 percent of their voters who hate her, will make the gridlock of the Obama presidency look like absolute comity by comparison.

Sorry, Hillary Clinton, but you’re the Susan Lucci of presidential candidates. No, wait, Susan Lucci was actually nominated 21 times and won once. It’s Super Bowl this weekend, so I guess the Cleveland Browns would be the appropriate metaphor – a great team that was thrice denied entry to the big game.

The “Science” That Anti-Marijuana Speakers Will Unleash in Arizona