PrevPreviousOregon Sheriffs Have $100K to Fight Legal Weed, But Not Rape
NextFeds Give Oregon A Million More Dollars to Fight Drugs Than RapistsNext

NIMBY is an acronym used in politics that means “Not In My Back Yard”. Sure, says the voter, we need a new prison or drug rehab or halfway house… but build it somewhere far away from me! NIMBYism is usually invoked in the name of The Children (please, won’t somebody think of the children!) whose delicate sensibilities must be protected from the realities of life.

Lately in Oregon, we’ve begun opening up state-licensed medical marijuana dispensaries. Every one I have visited is a clean, modern, secure storefront. There might be a green cross designating the location, but the entrance is locked with a buzz-through, the windows (if any) are opaque frosted glass, and there is no sort of ostentatious display of pot leafs, 420 culture, or barely-dressed sign twirlers out front. 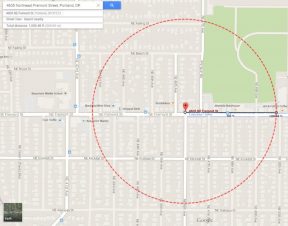 But that doesn’t stop the NIMBYs from screaming bloody murder if you try and open up a dispensary near them.

This weekend, The Oregonian ran a story about a proposed dispensary that hasn’t even opened yet in the Fremont neighborhood. “Children are up and down, riding their scooters,” said Katy Fackler, a mother of two. “My children personally go to the bookstore twice a week. We go to the candy shop. It’s a children’s neighborhood.”

“I just don’t want it there. It does not fit there,” said Michaela Santen, a mom of three. “We have a sweet, innocent neighborhood and I want to keep it that way.” 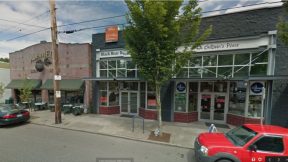 Fackler and Santen don’t seem too concerned about the Alameda Brew House, however. That bookstore Fackler’s children visit twice a week is literally one storefront away from the brew pub that features a giant bronze hops plant bud as part of its logo and allows adults to sit at tables right on the sidewalk as they consume a drug far more harmful than marijuana. Right next door to the Brew House is barilé, which is a craft wine and beer store. On the day 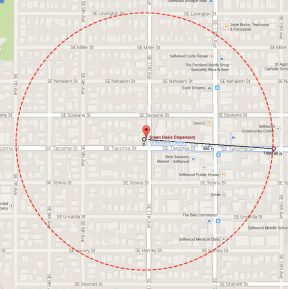 Google Street View took its pictures, there was a Rodney Strong Vineyards truck parked across the street making a delivery. As we continue down the block toward where the dispensary will be, there are two restaurants with sidewalk tables shaded by Widmer Hefeweizen umbrellas. One block past the dispensary is Mr. Peet’s Pub. Finally, just as we reach the end of the 1,000 foot zone around the proposed dispensary, we find Blackbird Wine shop.

Another NIMBY complained about Green Oasis, which opened up in the Sellwood neighborhood. As you may have guessed, within 1,000 feet we can find more alcohol outlets than marijuana outlets, including the Sellwood Public House, The Leipzig Tavern, and the The Portland Bottle Show – Specialty Wine & Beer, as well as restaurants with beer-sponsored umbrellas shading outdoor drinkers.

According to The Oregonian, Fackler has rearranged her living room furniture to avoid seeing the storefront from her window.  “I don’t know how it is going to serve that neighborhood specifically,” said Santen, without a hint of irony that sick people in her neighborhood need cannabis medicine while her neighborhood is served by at least six outlets within a 1,000 foot radius selling alcohol.

This is just rank bigotry, plain and simple. People like Fackler and Santen are just the latest Americans to freak out over the increasing visibility of “those people”.

When We Rise – Lessons for Marijuana Activism from LGBT Activism

Josh Marquis Thinks Quality Marijuana is “Not That Hard to Make”