Many people in the mainstream are recoiling in horror at recent remarks by the 45th occupant[1] of the White House to a group of assembled police officers in Suffolk County, New York.

“Now, we’re getting them out anyway, but we’d like to get them out a lot faster. And when you see these towns and when you see these thugs being thrown into the back of a paddy wagon — you just see them thrown in, rough — I said, please don’t be too nice. Like when you guys put somebody in the car and you’re protecting their head, you know, the way you put their hand over? Like, don’t hit their head and they’ve just killed somebody — don’t hit their head. I said, you can take the hand away, okay?”

Trump even says that we’re going to “support our police like our police have never been supported before” because “the laws are stacked against us, but we’re ending that.”

The laws are stacked against the police, he says. Tell that to the families of every unarmed person who has been killed by police, even on video, who then see the killer given paid leave, never indicted or eventually acquitted.

Notable police departments and organizations are rebuking Trump on his call for increased police brutality. Because in America, we’ve got all the police brutality we need, with over 700 individuals killed by police so far this year. (For comparison, Canada averages 25 police killings a year, Germany had 15 in two years, Australia had 94 in 19 years, England and Wales had 55 in 24 years, and Iceland’s had 1 police killing in all its 73 years of existence.)

A perfect example of some of our police officers’ more sadistic disregard for humanity comes to us from Cheatham County, Tennessee. Police had arrested 18-year-old Jordan Elias Norris for alleged “felony manufacturing / possession of marijuana for resale, possession of drug paraphernalia, theft under $500 and five counts of possession of a prohibited weapon, vandalism of over $1,000 and simple assault.”

Remember, Jordan is innocent until proven guilty in a court of law. In Tennessee, a felony for “possession of marijuana for resale” can be as little as one-half ounce. “Manufacturing” felonies begin at just one cannabis plant.

While Jordan was incarcerated, officers believed he was going to get into a fight in jail. So, they tasered him.

Jordan wouldn’t cooperate as officers tried to cuff him. So, they tasered him.

Officers then strapped Jordan into a restraint chair, which he resisted. So, they tasered him.

While in the chair, Jordan was belligerent, yelling about killing himself and asking to be shot. So, they tasered him throughout the three hours, with one officer saying, “I’ll keep on doing that until I run out of batteries.” 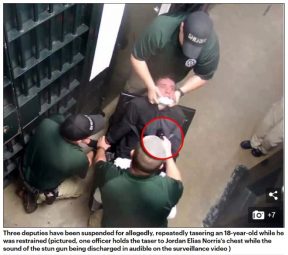 Afterward, the officers wanted to move Jordan from the restraint chair to a vehicle so he could be taken to the hospital. He wouldn’t comply, so they tasered him.

After fifteen minutes, the officers still couldn’t get Jordan into the vehicle. So, they drive-stunned him, which is when you press the taser directly against the body so as to produce excruciating pain.

According to the lawsuit Jordan has filed, when he was bonded out of jail, he had approximately forty pair of taser burn marks all over his body.

This is how cops behave now when they know they are on camera (video of the whole assault is here, viewer discretion advised).

The last thing we need, Mr. Trump, is these cops being given a green light to go ahead and “please don’t be too nice.”

Hyperlinked Text of the Maine Regulation and Taxation of Marijuana Act

Why Big Tobacco Taking Over Marijuana Is A Stupid Scare