The Rock and Roll Hall of Fame Class of 2021 has been announced. Finally, we recognize the transformational works of Gil Scott-Heron, Billy Preston, Kraftwerk, and Clarence Avant; the pioneering hip-hop of LL Cool J and Jay-Z; the rock artistry of Randy Rhoads, Todd Rundgren, and Foo Fighters; and the long overdue honors for women who changed rock forever, Tina Turner, Carole King, and…

Hold on, this must be a typo. The Go-Go’s? You have got to be kidding me.

Quick, name five Go-Go’s songs. You got “We Got The Beat,” “Our Lips Are Sealed,” “Head Over Heels,” and “Vacation” before getting stuck, didn’t you? No, “Heaven is a Place on Earth” is Belinda Carlisle, solo.

We’re talking about a band that had just three meaningful albums in ’81, ’82, and ’84. Only two of their singles even went Top Ten.

Compare that to the other inductees who produced more albums, more meaningful hits, over longer careers. You’re inducting pop princesses who didn’t even fill out half a decade with the songwriter who wrote Tapestry, the musician/producer who wrote “Hello, It’s Me,” the diva who escaped Ike Turner to reinvent herself as the top grossing female arena rocker and movie star, the poet who wrote “Pieces of a Man,” and one of the greatest rock guitarists in history?

The only criteria I can imagine that is earning The Go-Go’s a trip to the Hall of Fame is being the all-girl group at the advent of MTV. Which makes the Hall’s lack of induction of The Runaways more sacrilegious and their continuing snub of Styx more unacceptable.

Don’t get me wrong, The Go-Go’s are a fine band. But a three-year splash on MTV and being female seems hardly the résumé one should have for a Hall of Fame. Especially when that Hall is lacking Pat Benatar, who, during the early 1980s while The Go-Go’s managed three Top 20 albums and five Top 40 singles:

I just don’t get it. I understand that induction into the Rock Hall isn’t all about chart success. Part of it is the impact a musician or group has on their genre and music as a whole. Even by that standard, however, I can’t see the case for inclusion. The aforementioned The Runaways broke the mold that said a rock band couldn’t be all-female, and Heart before them broke the mold that women couldn’t rock at all. Nothing about The Go-Go’s music is influential moving forward; it’s bubblegum surf rock, basically. They didn’t even lead a wave of new all-girl rock bands. They represent a mere snapshot of early MTV before Michael Jackson, Prince, and Bon Jovi took over and are clearly just a nostalgia nomination.

Marijuana Initiatives May Not Help Democrats Any 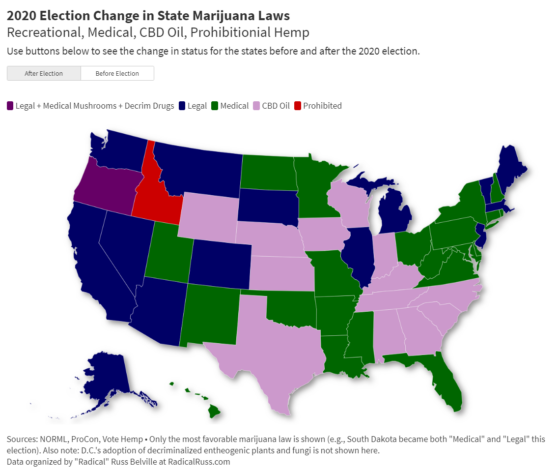