PrevPreviousTennessee Steals Toddlers and Condemns Their Father to Death Over Medical Marijuana
NextOp-Ed: Why Does OLCC Warn Against Parental Toking, But Not DrinkingNext

Why Doesn’t Oregon Tell Parents Not to Drink in Front of Their Children?

When I purchased some marijuana recently at a licensed retailer, it came with a small scrap of paper. 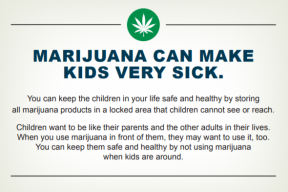 You can keep the children in your life safe and healthy by storing all marijuana products in a locked area that children cannot see or reach.

According to the OLCC website, under the heading “Consumer Health and Safety Information,” the law requires the retailer to give me this scrap of paper “with each sale of a marijuana item.”

I applaud the state for including this warning. We all want to keep harmful substances meant for adults out of the hands of children.

However, I take issue with the next part of the warning, which reads:

Children want to be like their parents and the other adults in their lives. When you use marijuana in front of them, they may want to use it, too. You can keep them safe and healthy by not using marijuana when kids are around.

Modeling healthy behavior for children is laudable, but the suggestion that seeing their parents using marijuana endangers the children is preposterous and unconvincing.

Many parents using marijuana are doing so for medical reasons, even if they don’t register with the prohibitively-expensive Oregon Medical Marijuana Program. To suggest they go hide when they use that medicine but not when they use their prescriptions is discriminatory.

I have never been handed a scrap of paper when I make a prescription drug purchase in Oregon that tells me to keep it locked up, away from children, and don’t let them see me use it.

Why is that? After all, while “marijuana can make kids very sick,” prescription drugs can actually kill them.

Seeing parents use marijuana responsibly and maintain functional lives would be modeling healthy behavior for those children if they decided to use marijuana once they became adults.

Even the parents using marijuana for personal reasons, to relax and unwind, should not be treated by the state in any different fashion than those parents who might drink a glass of wine or pop open a cold beer in front of their children.

However, when I perused the OLCC website for “Consumer Health and Safety Information” for alcohol, there was nothing like the section on marijuana.

The closest thing I could find as far as warnings mandated by the state regarding alcohol and children are the signs that must be posted in bars warning that pregnant women should not drink alcohol.

I have never been handed a scrap of paper when I make an alcohol purchase in Oregon that tells me to keep it locked up, away from children, and don’t let them see me drink it.

Why is that? After all, while “marijuana can make kids very sick,” alcohol can actually kill them.

One could make an argument about not smoking marijuana in front of children to protect them from secondhand smoke. If that’s the case, then there’s no call for handing over that scrap of paper for purchases of edible and vaporized marijuana products.

I have never been handed a scrap of paper when I make a tobacco purchase in Oregon that tells me to keep it locked up, away from children, and don’t let them see me smoke it.

Why is that? After all, while “marijuana can make kids very sick,” nicotine can actually kill them.

While adults smoking cigarettes, drinking alcohol, popping pills, and even eating fast food is modeling behaviors far more likely to lead to negative health outcomes for their children, the state of Oregon wants to waste a scrap of paper on every marijuana purchase to tell adults to hide their use of it from their children?

That’s nothing more than a cultural bigotry against marijuana consumers. I will be contacting my representatives to demand that mandated public health warnings regarding marijuana and alcohol are equitable.

Thank you for reading my complaint.

Give Me Bernie Sanders Or Give Me (Political) Death!